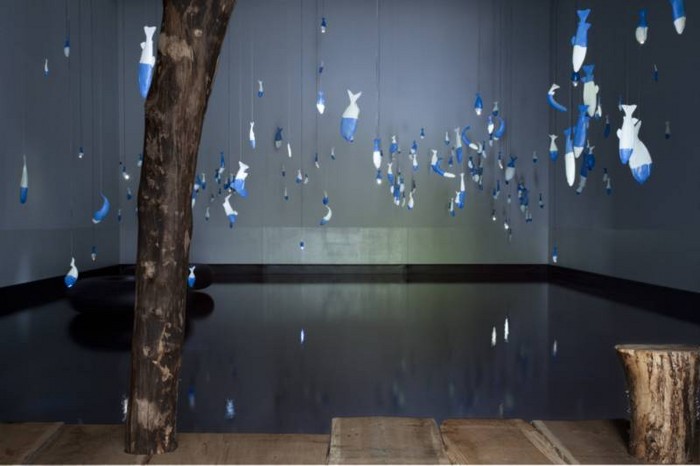 With the site specific installation On the Way to the Alps I See Sand, Thai artist Att Poomtangon (born 1973 in Bangkok) deals directly with the geographical location of Portikus, taking the Main river surrounding Portikus-island as a point of departure for a wide-ranging investigation of how society deals with natural resources and the economical forces produced as a result. As is often the case with Poomtangon, his work first began by collecting research material from digital and print media: on the meaning of water as resource, on fisheries, society’s relationship to fishing relative to the food pyramid, a reduction in biodiversity, and on the river, the Main in Frankfurt, generally as well as from an historical overview. As all of us are already aware, the diversity of fish stocks is being constantly reduced and the ecological equilibrium of our rivers is changing as a result.

These considerations range far beyond the local focus and associate the situation of fish stocks in this country with conditions in Poomtangon’s home country of Thailand, where people live traditionally with and from fishing even today. Still widespread, fishing in Thailand is done with very direct means: with oversize, simple car tire inner tubes and large plastic bowls fishermen move around on the water. They catch fish while standing over the water, as if from a small island. The plastic bowls serve simultaneously as a boat and also hold the catch. But in a different way, in Thailand considerable value is also placed on honoring the animal kingdom, which also involves societal rituals. People gather together in temples in order to give fish sustenance, and to observe the goings-on. And, not least, these moments also function as a distinct form of social communication.

Now a large—approx. 90 sqm.—tub of water is situated inside Portikus’s exhibition space. Moving about on the water’s surface are small, improvised inner tube boats, which can be reached from a wooden bridge. Whoever is brave enough can navigate around the almost 60-70cm deep water on plastic bowls and rubber tires, and paddle through the exhibition space. The room has been darkened and only minor, selective sources of light in the form of suspended, fish-shaped luminous objects provide orientation within the exhibition.

With this installation Att Poomtangon is interested in communicating to society that the changes in our environment shouldn’t go unobserved. The situation that he in fact sets up is not directly political, rather he seeks to create the ritual-intoned atmosphere of a Thai temple in which the senses are sharpened and the raising of awareness is achieved by personally engaging the space physically.

This convergence of fundamental themes of social engagement and the questioning of technological achievements that profoundly influence the ecosystem have been features of Att Poomtangon’s art work for a number of years. In a rather poetic way he has succeeded in tracing, by means of a cultural translation, that which gets lost in an automated cultural process.

The work The Devil Finds Work for Idle Hands to Do (2007), for instance, makes use of cultural metaphor in reflecting upon moral parameters. The installation of nearly 200 pieces of reworked, but essentially useless driftwood, culled from the banks of the Main over several months time, pursues the notion of personal conflict, which Goethe may have experienced when he wrote his famous tragedy Faust and, for the sake of success, allowed his protagonists to enter a pact with the devil. The Devil Finds Work for Idle Hands to Do follows the same course and applies it to the idea of progressive absorption. The chisels and saws that are also displayed, and ironically also imprinted with the (company’s) name “Faust”, serve as “proof” that the artist personally, slowly, and carefully carved the details of the devil’s hoof from individual branches and tree trunks.

With Nouvelle Cuisine Fast Food (2008) he addresses the everyday necessity of consuming food and fuses, in a rather consciously nutritious way, raw Asian foods and spices into a frozen hamburger format, akin to a futuristic vision of a perfectly controlled form of existence.

Att Poomtangon was born in 1973 in Thailand and studied art and sculpture at Chiangmai University through 1999. Last year he also completed his master’s studies with Tobias Rehberger at the Städelschule in Frankfurt am Main. For the exhibition Fare Mondi – Making Worlds at the 53rd Venice Biennale, Poomtangon presented a large, room-scale public sculpture on the grounds of the Arsenale. In 2008 the Nassauischen Kunstverein in Wiesbaden presented Poomtangon’s work in the solo exhibition something about tomorrow evening.

This exhibition is generously supported by Deutsche Bank Stiftung and Stiftung Polytechnische Gesellschaft.