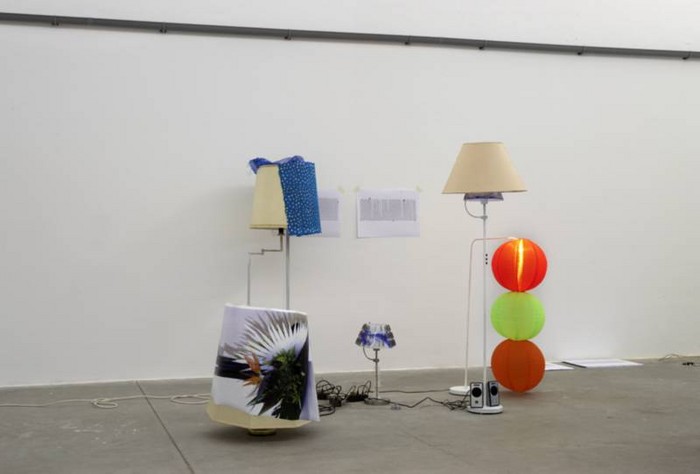 A bridge, an ellipsis, a sudden trailing off, the title of this exhibition, etc, the ... might also be the blub blub blub of an underwater clam drawn by Jack Smith ("Ploduction Ploblems"), or a sort of mussel-talk taking over. In Réné Daumal's unfinished novel Mount Analogue, which narrates the search for an invisible mountain (the largest on earth), there is a description of the money used in this place: smooth, pearl-like orbs dug out of the invisible mountain's soil and very difficult to find. So on Mount Analogue, the ... would also be a price, a sum, exact amount of invisible cash. (excerpt from the index of the accompanying book, published by Buchhandlung Walther König, Cologne)

New York based artist Gareth James' solo exhibitions include shows at Elizabeth Dee Gallery, New York (2006); American Fine Arts, Co, New York (2001)
James is partner of Orchard, New York, a cooperatively organized exhibition and event space since 2005. He co-founded the editorial office and project-room Scorched Earth in 2006 (with Cheyney Thompson and Sam Lewitt). James is currently the Chair of the Fine Arts Department, Columbia University.
John Kelsey, artist and writer based in NYC, permanent member of Bernadette Corporation, in 2004 co-founded (with Emily Sundblad) Reena Spaulings Fine Art. A contributing editor at Artforum magazine, his text "My Other Painting Is a Car" will be published this month in the catalogue for an upcoming retrospective of Richard Prince paintings (Astrup-Fearnley Museet for Moderne Kunst/Oslo).
Josef Strau, artist and writer based in Berlin. founder and organiser of Galerie Meerrettich, Berlin, based in the pavilion at Rosa-Luxemburg-Platz next to Volksbühne since 2002.
1990-93 together with Stefan Dillemuth organiser of Friesenwall 120 on Cologne.
Michael Krebber, Cologne-based artist and teacher at Städelschule in Frankfurt since 2002. His work is currently shown at Kunsthalle Nürnberg, The Most Contemporary Picture Show, Actually (with René Daniels and Klaus Merkel.