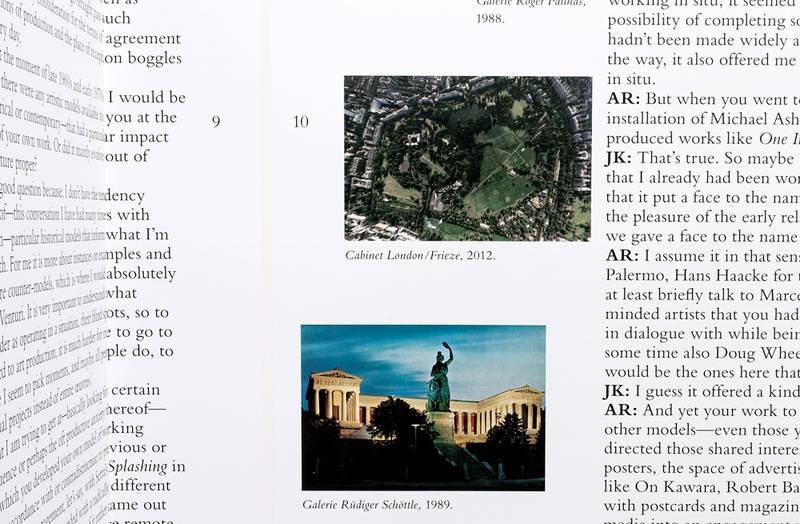 John Knight's exhibition at Portikus could not be more current. Just some weeks ago, the contractual agreement of one of his artworks was violated: As part of another artist's solo presentation at Berlin's Hamburger Bahnhof Museum für Gegenwart, John Knight's piece The Right to Be Lazy (2008), which is a permanent work in the museum's collection, had a sculpture installed on top of it. John Knight's work for the Hamburger Bahnhof—like all his works—is an intervention into the existing architectural, social and political fabric of the place. The formal agreement between the institution and the artist was that the rondel, the circular lawn in front of the entrance to the building, was never to be tended and left to grow naturally by the command of the seasons. The installation of another artwork on this very site happened without contacting the artist to negotiate a temporary "removal" of his piece. In a letter to the museum's director, John Knight writes: "This project is not a typical art object that can be moved willy-nilly, but, rather, a work in situ, in perpetuity; a work completely connected to its site, by extension, the cycling of the seasons, year upon year, as it was clearly agreed upon at the time of its installation."

This incident manifests the complication inherent in working context-specific, but it also calls for a conversation about how today's institutions manoeuvre such artistic practices. Individuals and situations nurture the dialogue necessary for John Knight's work to function, in a way that allow endless constellations of meaning to arise. Various constellations brought JK to Frankfurt. By contractual agreement, the development of the project happened closely within the complex confines of the institution, people's roles within and connections to it. A speculation is that the organic "becoming part," the engagement of the artist, in relation to the work's conceptual nature is why JK can take on a close to mythical status. For Portikus, John Knight developed a project that takes the form of a publication. It is part of the series of books that he has been producing as extensions of his exhibitions for decades. The publication functions as the exhibition itself, having been enlarged to correspond with the scale of the exhibition space, as well as its documentation. This publication comes in an edition of 1.
www.portikus.de