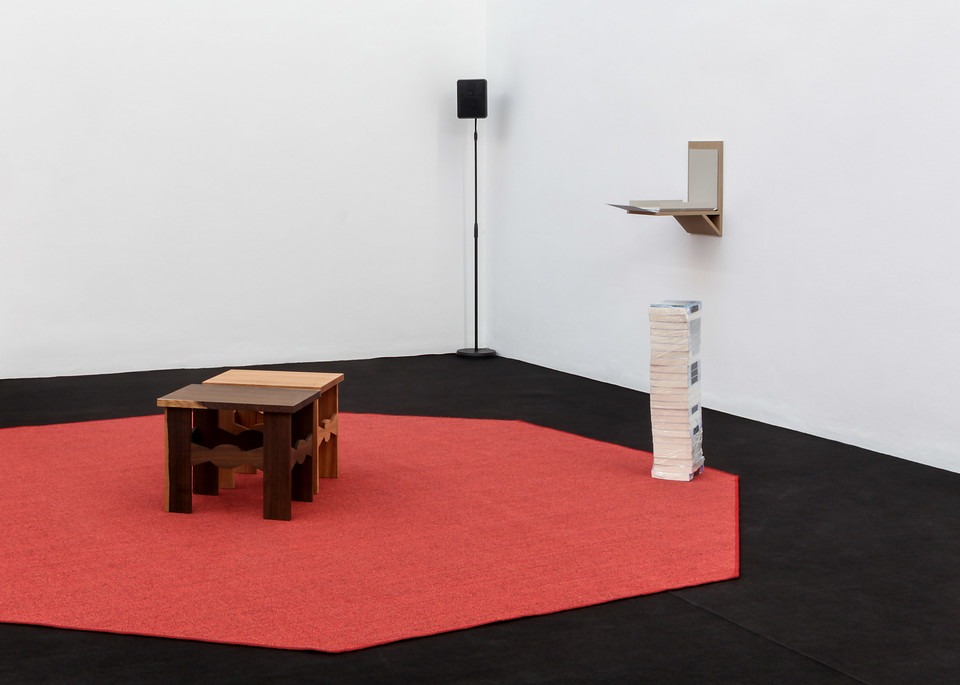 The first meeting between the curators Philippe Pirotte, Bonaventure Soh Bejeng Ndikung, and Christina Lehnert, and the artists Leo Asemota and Nástio Mosquito began with an Ulonga, an Angolan tradition in which generally one recounts what one has experienced, thought, and felt since the last meeting. The format of communal speech is part of a series of cultural conversation techniques such as the palaver which, apart from its everyday meaning, dates back to a form of assembly in which decisions are first made when an agreement has been arrived at through conversation. Here, decisions are not the product of pre-established abstract rules but rather develop over the course of a conversation. The fact that Leo Asemota could only be streamed in to the first Ulonga via Skype in Philippe Pirotte’s office reveals a dimension that has also determined the exhibition: politics which affect the freedom of individuals and their movement as well as the convenience of traveling from Berlin or Lisbon to Frankfurt. One doesn’t require any analogies to see how politics and globality have repercussions on the collaboration of the participants. This conversation served as the starting point for the exhibition #215 in spring 2018.

The idea for #215 came from a private exchange of voice recordings between both artists, which they have been sending each other since meeting on the occasion of Savvy Funk, the radio program at documenta14. The voice messages produce a temporally displaced dialog, which enabled a different kind of conversation. Conversation forms like the dialogue and monologue as well as interaction thus came to characterize the form of their collaboration in the exhibition #215.As an institution and subsequent public space, the works and installations transform the Portikus into a site where encounters, privacy, manifestation, and thought all coexist. The collaborators, carpenters, designers, and architects were all involved in planning the exhibition and expanded the design of #215 and its sphere beyond the institution through their means. The works of both artists were developed specifically for the exhibition and draw on the architectural, functional, geographical, and atmospheric particularities of the Portikus.

Both artists work across a variety of media, which not only reflect the claim of origin as well as the search for a sense of place within modern and politically-influenced biographies on the level of content, but also on the level of materials.#215 is the first exhibition that the artists Leo Asemota and Nástio Mosquito have worked on together. It is an encounter between both artists, their works, and their collaborators (#215 Studio) at the exhibition venue Portikus.

Leo Asemota was born in Benin City in Nigeria. He has places of residence in London, England and in his birthplace in Benin City, Nigeria.

Nástio Mosquito was born in Angola and lives between Lisbon and Ghent.

Funded by the TURN Fund of the German Federal Cultural Foundation. Additionally funded by the Hessische Kulturstiftung. With support by MESO Digital Interiors.