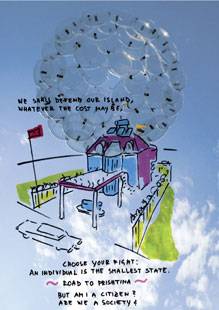 On May 5, the Slovenian artist Marjetica Potrc and the Argentinian artist Tomas Saraceno will open the new Portikus with the exhibition Personal States / Infinite Actives. This will mark the 140th exhibition of the 19-year-long history of Portikus.

Both artists work with architecture and investigate the possibilities of alternative living strategies to be realised individually or collectively. The work of Marjetica Potrc (*1953 in Ljubljana, where she lives and works) include drawings, wall paintings and architectural sculptures that function as case studies for a kind of improvised and self-initiated buildings that one finds world-wide. Her works display urban space as a living and ever-changing organism, that adapts itself accordingly to the needs and demands of equally transitory communities. Potrc’s main interest lies in large, contemporary cities with their perpetual renewing and re-defining qualities and the juxtaposing function of planned, formal and informal “do-it-yourself-strategies“. In terms of their social and cultural elements, she investigates aspects such as energy and water allocation and urban agriculture. Her projects join cultural and economic experiences and interact with various levels of social an d urban investigation. For the project at Portikus, Potrc developed a new work that draws a link between Frankfurt and Prishtina. This work, Prishtina-House, brings together both personal and modernist styles and shows the creation of a new architectural typology.

Tomas Saraceno (*1973 in Tocumán, Argentina, lives in Frankfurt am Main) investigates the possibilities of flying, air-borne housing as a conceivable solution for the population growth and rapidly changing climates. Flying Garden is a part of a longer-term project entitled, Air-Port-City. His point of departure is the development of inhabitable platforms that float in mid-air like clouds that join together in various formations. Saraceno’s works, which relate to the projects of different forerunners such as Buckminster Fuller’s Geodesic Domes or the utopian city project, Walking City, from Peter Cook, initially come across as a „flying utopia“, but are meant as feasibility projects of collective planning and cooperation.

For the duration of the exhibition Saraceno will create a sort of laboratory situation that will offer a glimpse into the development of a new project for the public sphere.

The first work from Olafur Eliasson’s Light Lab series has been installed under the glass roof of the new Portikus building and is visible at night from the outside. Over the next two years, further light-installations will be created and continuously change the appearance of the building.