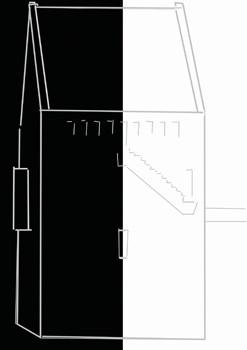 Since the late sixties, Martha Rosler has commented on current events and socially relevant issues in caustically critical but also humorous works. With a keen eye for the stuff of everyday life and for social conventions, Rosler deconstructs, layer for layer, todays "mythologies". Martha Rosler has created seminal work in the fields of photography, installation, performance, video, and writing; she is also the author of influential critical and theoretical essays. She is not bound by any specific medium and deploys those methods and strategies that seem to her adequate to the individual issue she seeks to address. She thus deliberately uses a language familiar to many and does not shy away even from the burlesque mode. One prominent object of Rosler's poignant analysis and dry humor has been the role of the mass media, especially in times of war. In her series of photomontages "Bringing the War Home: House Beautiful and Bringing the War Home: In Vietnam" (1967-72), which have since become legendary, Rosler articulated her anger over the reporting from Vietnam. The manipulated scenarios sought to initiate reflection on the actual experience of war abroad and on how the same war is experienced at home in front of the TV or through the papers. In a purposely retrograde maneuver, she has reinstituted this series in relationship to Iraq and Afghanistan (2004, 2008).
Martha Rosler's work has been consistently critical of the positions in which women find themselves in society. In her series "Beauty Knows No Pain, or Body Beautiful" (1965-74), photomontages composed of depictions of women, she criticizes the way media represent women as objects of sexual lust and symbols of the commodity circulation, and assign them certain attributes such as domesticity and emotionality. In the context of the women's movement, Rosler began to work in the medium of performance art.
Another central aspect to Martha Rosler's oeuvre is her critical engagement of the urban structures in which we live, as the sites of our everyday experience, and their social implications. As early as the mid-seventies, Martha Rosler's installation "The Bowery in two inadequate descriptive systems" (1974-75), which combines photography and writing, interrogated the role and representation of documentary photography by contrasting pictures of vacant storefronts on the Bowery, a Manhattan street populated by homeless people, with photographs of writings, a "poetry of drunkenness". In all of her investigations of specific issues, her studies of how the system of a white- and male-dominated culture permeates everyday life, in her theoretical work as much as her writings and visual work, her performances and videos, Martha Rosler has pursued one principle as her aesthetic strategy: "[If you want to] bring conscious, concrete knowledge to your work ... you had better locate yourself pretty concretely in it." (Rosler in an interview in Afterimage in 1981)


For her show at the Portikus, as for documenta 12 and for last years Skulpturen Projekte Münster, Martha Rosler has designed an exhibition situation motivated by site-specific features. Following the principle of montage, she examines various aspects that compose, in both a historical and a contemporary perspective, the image of the city of Frankfurt as a metropolis of trade. The exhibition begins at the exhibition site itself, the Old Bridge, as a trading route of historic importance; continues with the history of the former Jewish ghetto, the Judengasse; and then turns to the banking district, which symbolizes the center of European finance. Martha Rosler pursues the question: which components make up the "branding" of a city such as Frankfurt? One commonplace asks "What are the three most important things to look for when choosing a building site? and answers: "location, location, location."
www.portikus.de