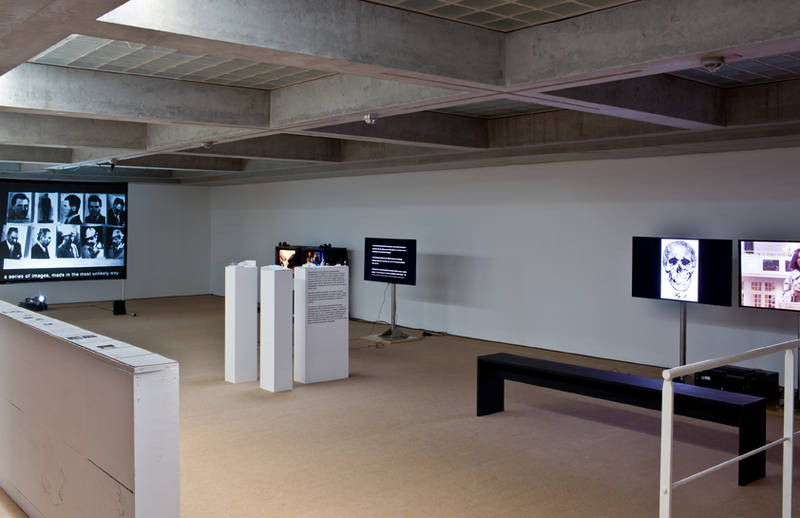 The exhibition „Mengele's Skull“ is structured around a specially commissioned book of the same title co-authored by Thomas Keenan and Eyal Weizman. Artist and filmmaker Hito Steyerl has been commissioned to respond to the proposition laid out in this book. Next to major new works by Hito Steyerl, this exhibition presents documentary and source materials.

The publication Mengele's Skull discusses the forensic identification of the remains of infamous Nazi-doctor Joseph Mengele after his exhumation in 1985. The forensic investigation and identification of Mengele's remains marks a transition. From now on, the "era of the witness", centered around human testimony and trauma, gradually gives way to an "era of forensics", in which things – such as bones – act as the witnesses of past events. How do bones act as witnesses? What role do technologies such as 3D scans and biomedical data play in the making of forensic evidence? And what is the role and politics of images?

Hito Steyerl's installation The Kiss is the reconstruction, using forensic 3D technology, of an event that occurred during the war in Bosnia. In 1993 twenty passengers were abducted from a train by a paramilitary unit, none of whom was ever seen again. The names of 19 of the kidnap victims are known, while the identity of the 20th – according to eyewitnesses a black man – remains obscure. Several witnesses have reported that the leader of the armed group kissed him while marching him off – nothing else is known. Rather than representing the event, The Kiss shows the absence of reliable information and data, and in the last instance, of the missing passengers themselves.

Hito Steyerl ́s film Leibniz' Skull is a two-channel work on the certainty and uncertainty of forensic identification methods. The upper gallery, conceived as a resource room, is structured around the publication Mengele's Skulland the work of two forensic anthropologists, Richard Helmer and Clyde Snow, who played a major role in the identification of Mengele's remains. A film-lecture of the same name authored by Eyal Weizman and Thomas Keenan and realized by Kerstin Schroedinger describes the process of the identification of Joseph Mengele's skull using footage of the time as well as interviews conducted with Snow and Helmer, situating the scientific process of the identification within its larger mediatized and performative context. A film co-authored by Paulo Tavares and Eyal Weizman and realized by Steffen Krämer is devoted to a contemporary political context in which forensic investigations reshape national politics. The film follows the forensic anthropologists as they recover the remains of the victims of the 1982-84 US-backed, anti-communist genocidal campaign that left over one hundred thousand Mayans dead and completely destroyed four hundred indigenous communities in the highlands of Guatemala. Also on view are what Eyal Weizman calls "documentary sculptures" – three-dimensional prints made from scans of crime scenes, used for police investigation and in courts and media.

The book published on the occasion of the exhibition is available in the Portikus bookshop and at Sternberg Press.