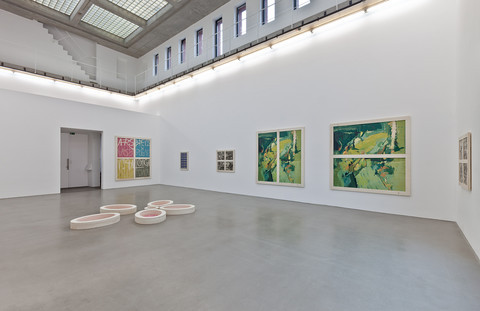 Portikus is pleased to present new work by the Venezuelan artist Meyer Vaisman after a hiatus of almost ten years. Back in the 1980s, Vaisman was regarded as one of the most promising protagonists of the New York arts scene; with Ashley Bickerton, Jeff Koons, and Peter Halley, he was a member of the quartet known as the “Fantastic Four.” He was also a founding member of the East Village gallery International With Monument, which mounted early shows of work by artists including Richard Prince and Laurie Simmons.

Although many people are familiar with Meyer Vaisman’s art, he has been largely absent from the art world in recent years. After a final show at Gavin Brown’s gallery in 2000, he dropped out from the New York arts scene. The farewell display included a life-sized effigy of the artist’s therapist in New York, holding a harlequin’s suit in her hands that was patched together from clothes belonging to his parents. In retrospect, the Freudian overtones in the piece seem ominous: Vaisman subsequently suffered a series of psychological and emotional blows that ultimately led him to a new kind of spiritual devotion.

Primarily working with commercial and photomechanical reproductions, Vaisman had often questioned the role of authorship. In the new works he has assembled for Portikus, he has reduced his involvement in the production of his art to a minimum. He tried to stay out of the manufacturing process as much as possible by working with an assistant whom he describes as his ‘soul mate’ and who painstakingly carried out his directions.

After a decade-long furlough from visual art during which he immersed himself in Jewish spirituality and grew increasingly disenchanted with figurative art, Vaisman has taken up the invitation to show his art at Portikus and presents a selection of abstract works: prints on wood that should be categorized as paintings and whose expressive intensity recalls action painting; large-format paintings of the artist’s thumbprint that may be read as self-portraits, and text-based pieces. Revealing the scaffold that holds up art’s façade, the stretcher frames are mounted on the faces of the pictures. One central element in these recent works is the artist’s signature, which he repeats until it virtually ceases to be recognizable as such, fading into abstraction: a seemingly self-referential gesture that blankets everything.
The exhibition at Portikus heralds a new and more abstract phase in Vaisman’s oeuvre while continuing his exploration of his own identity.
www.portikus.de