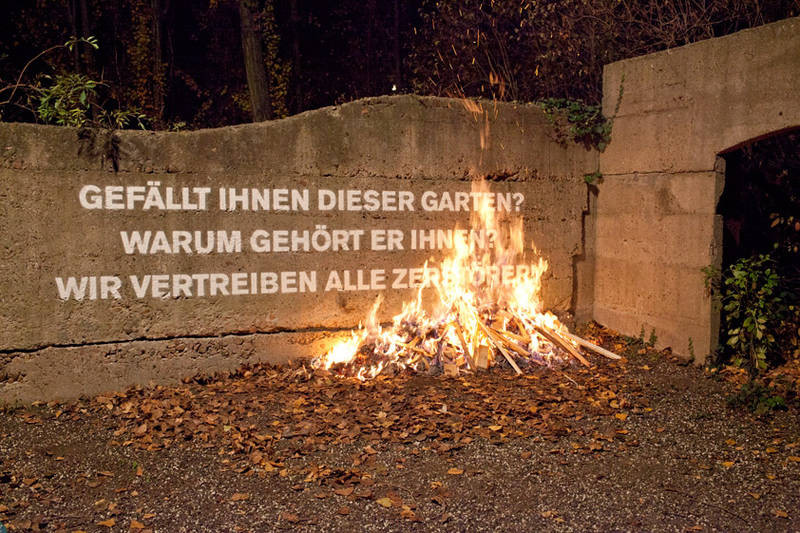 The exhibition You Like This Garden? by the Scottish artists Ross Birrell, David Harding, and Douglas Gordon continues a theme that has been discernible in recent shows at the Portikus. Once again, the artists engage in a close exchange and have a shared history that goes back many years. Birrell, Harding and Gordon have all spent extended periods of time at the Glasgow School of Arts, where their paths crossed. For fifteen years, until 2001, David Harding headed the school’s sculpture department; in 1987, he founded its “Environmental Art Programme,” which would make history. Douglas Gordon was Harding’s student at the time; Ross Birrell now teaches at the art school. Over the years, they came together over their shared interest in matters of film and language, and initiated a variety of projects.
It has become a tradition that professors at the Städelschule show their work at Portikus, and so is Douglas Gordon, who has been teaching the film class at the school since 2010. It was very important to Gordon to include his own teacher in the exhibition in order to illustrate an interconnection across the generations between the roles of professor and student. It suggests a reinterpretation of functions and authorities, an almost pedagogical approach that Gordon may have learned from Harding and that Birrell, too, hews to in his teaching and his collaboration with Harding.

The temporary second floor installed at Portikus allows for a wide- ranging presentation of films Birrell and Harding have produced in their decade-long collaboration. In the main hall, a film installation developed specifically for this room displays two films. Cuernavaca: A Journey in Search of Malcolm Lowry (2006) tells the story of how the two artists travelled in the footsteps of the British writer Malcolm Lowry, best known for his novel Under the Volcano, which he wrote in Cuernavaca, Mexico. Guantanamera (2009) consists of two films shot in Cuba and in a Cuban community in Miami immediately after Fidel Castro stepped down. The installation at Portikus synchronizes sections from these films such that the life of Malcolm Lowry is accompanied by the popular song “Guantanamera,” written by the poet and revolutionary José Martí and performed in this instance by two Cuban singers. On the second floor, the artists present Port Bou: 18 Fragments for Walter Benjamin (2006), also a documentation of a trip they took, this time to trace Walter Benjamin’s tragic attempt to escape through the Pyrenees to Spain. Complete versions of the two films staged on the lower floor are also screened here.
Douglas Gordon’s position with regard to the exhibition is a particular one. He produced Guantanamera with his production company “lost but found,” blurring the classical division of labour between artist, intermediary, and institution. His contribution to the show consists of a new piece for Portikus’s rooftop space, where Olafur Eliasson’s light installation Light Lab has been installed since the new building on the Maininsel opened its doors. For the duration of You Like This Garden?,the roof will now be used for Gordon’s film, a monumental urban transmitter, which is visible throughout the city. In the work projected, Gordon makes reference to Birrell and Harding’s practice, completing the circle in spatial terms as well as with regards to content.

The exhibition is presented in collaboration with the MMK Museum für Moderne Kunst, where the concurrent show “Douglas Gordon” will be on display.
www.portikus.de