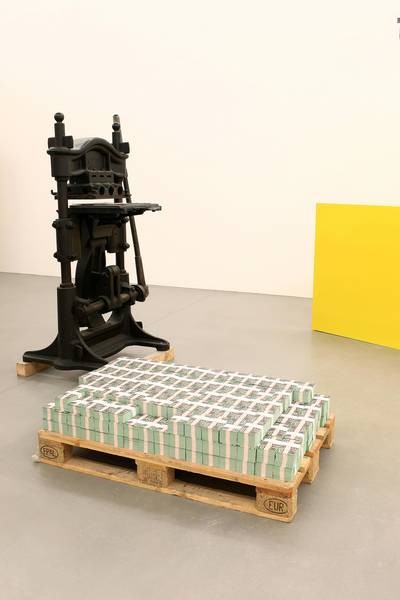 On May 6, 2011, Portikus will become a bank. Initiated by artists Julieta Aranda and Anton Vidokle in 2009, Time/Bank is a platform that enables people to trade goods and services without using money. With a growing pool of more than a thousand participants around the world, Time/Bank allows groups and individuals to collectively exchange their time and skills through the use of credits earned through the bank, as an intermediary and guarantor. Time/Bank aims to create an immaterial currency and a parallel micro-economy for the cultural community, one that will create a sense of worth for many of the exchanges that already take place within the art field.

At Portikus, the Time/Bank will be comprised of four main components: an exhibition of artist-designed prototypes for a time-based currency; a currency mint that will print and circulate four hundred Hour Notes—one for each hour of the exhibition; an archive of Notgeld notes—the legendary German alternative currency popular during the hyperinflation of the 1920s; a branch of Time/Store offering a range of commodities, groceries, and articles of daily use, as well as a selection of artist’s editions and books produced by Portikus.

The Frankfurt branch of Time/Bank will include a network of local art institutions and organizations, such as the MMK Museum für Moderne Kunst, Schirn Kunsthalle Frankfurt and the Jewish Museum, amongst others, where the currency of the Time/Bank—Hour Notes, designed by the American artist Lawrence Weiner—can be used for admission, and to make purchases in cafeterias and books stores.

In conjunction with the exhibition, Portikus will publish a book dealing with qualities of time, gift economies, alternative currencies, and other related topics. The book will include commissioned essays and illustrations, as well as contributions by members of Time/Bank.

Since 2003, Julieta Aranda and Anton Vidokle have been frequent collaborators on numerous art projects, including e-flux video rental, an art work in the form of a free video rental shop, which started in New York in 2004 and has since travelled to art centers throughout the world including KW, Berlin, Extra City, Antwerp, Portikus, Frankfurt, Lyon Biennial, Gulbekian Foundation, Lisbon and many other. In 2007, Aranda and Vidokle opened Pawnshop, a pawnshop for art which went bankrupt in New York at the onset of the global economic crisis in 2008 to reopened a year later at Vitamin Creative Space in Beijing, China. Together with Brian Kuan Wood, Aranda and Vidokle are co-editors of e-flux journal.

Time/Bank is made possible with the support of Kulturfonds Frankfurt RheinMain. The exhibition is part of the project Art & Life with the Staatliche Hochschule für Bildende Künste – Städelschule, running from October 2010 until 2013. Within this framework, Art & Life features internationally renowned representatives from art, architecture and science, developing new approaches in linking the fields of art and everyday life.
www.portikus.de