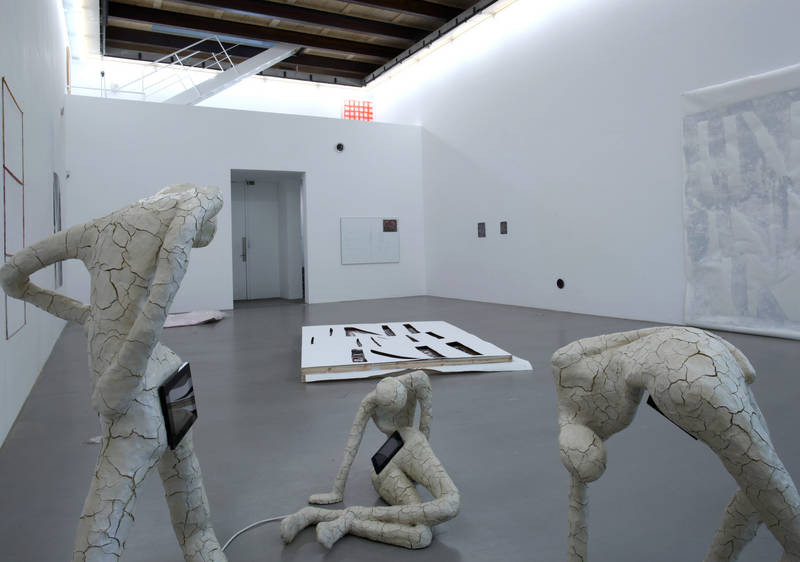 The artist Tom Humphreys presents a group show at Portikus that takes a very personal look back at the exhibition space Flaca he organized at his London home between 2003 and 2007, and reflects on his own artistic position within this structure. The exhibition Flaca / Tom Humphreys takes up Portikus’s tradition of challenging, testing, and interpreting the exhibition hall in forever new ways, alluding to qualities of familiarity and domesticity in the building’s architecture.

Flaca defies simple linear description—more than forty artists, in a variety of constellations, showed their work in the space. Tom Humphreys developed the program of exhibitions as well as the individual shows in an ongoing exchange of ideas with the artists he invited. As a consequence, each exhibition project was distinctively different. As Christian Egger writes in his contribution to the catalogue: “Exhibiting there often meant that you could look with a fresh eye at the first solo shows in London of artists you’d only just seen at Flaca, and that was all really quite exciting, as though you were experiencing a little bit of what the mobile phone you’d brought along had gone through when you first scared it by charging it with island juice, there was somehow a different energy—a flirtation with malfunction.”

His engagement with the past of Flaca as a site led Tom Humphreys to develop an exhibition for Portikus that makes no pretence to offer an illustrative or historically accurate representation of his activities at the time, instead turning into a distorted double set in the present. Humphreys is interested in questioning the activities of that time; some of the artists he invited for this exhibition, for instance, never showed at Flaca. He also combines “originals,” such as the works Michael Beutler and Henning Bohl produced for Flaca, with more recent works and ones specially developed for this exhibition, such as Nora Schultz’s wall structure, which serves the artist herself as a printing tool while acting as a display surface in the context of the show. The alterations to the building—a new floor has been inserted, and the exhibition incorporates unconventional sites such as the garden and the stairwell—are instruments that allow Humphrey to break free of established readings of the room. Within the framework of this temporal and spatial hybridization between Portikus and Flaca, the art institution on the island in the river Main is inscribed upon the building on Broadway Market and vice versa.

Tom Humphreys himself has produced a work for the exhibition that draws on the format of the Portikus poster (each artist who exhibits here creates his or her own design). Instead of making a single representative exhibition poster, Tom Humphreys designed and produced an entire series of exhibition posters bearing titles such as FLACA / PORTIKUS, HOUSE ARREST, REBOUND (2005) and REPRODUCTION that he placed in the stairwell—which is usually decorated with posters from past Portikus shows. In this way he creates a position for himself that also defined his work at Flaca: somewhere between a host, an exhibition producer, and an artist. Humphreys’s selection of invited artists and the works on show gesture toward a shared artistic attitude, while avoiding any sort of unifying thematic or formal feature. The result is an organic structure that presents a historic narrative but also opens up a space for endless and irresolvable implications of the work of art.

Portikus will publish a book on the occasion of this exhibition.
Tom Humphreys has created an artist edition, available at Portikus.

Flaca / Tom Humphreys is made possible by Kulturfonds Frankfurt RheinMain. The exhibition is part of the ongoing project Art & Life at the Staatliche Hochschule für Bildende Künste – Städelschule. Since October 2010 and through 2013, Art & Life is sponsored by the Kulturfonds Frankfurt RheinMain. It features internationally renowned representatives from art, architecture and science, developing new approaches in linking the field of art to aspects of everyday life.
www.portikus.de