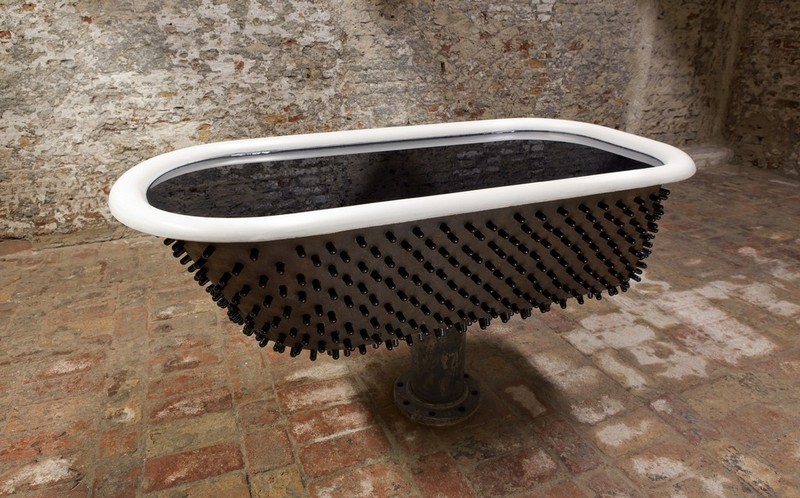 The first exhibition describes the Foundation’s cultural approach without imposing a single, thematic interpretation of the art and museum materials presented. Each individual installation and presence in the palazzo’s rooms should therefore be considered as examples of the different aspects of the Prada Foundation’s identity since its founding in 1993 by Miuccia Prada and Patrizio Bertelli as a venue for the promotion of contemporary art. The show features a selection of art works from the collection, a glimpse of future collaborations, and the project for its new, permanent site at Largo Isarco in Milan, designed by Rem Koolhaas and OMA, which includes, at Ca’ Corner della Regina, a series of scale-models of the future exhibition complex, which will open in 2013.

Using the work collected over the years as its starting point, the opening of “Fondazione Prada _ Ca’ Corner dell Regina,” curated by Germano Celant, features a wide range of works and installations created in learned collaboration with such museums as The Hermitage of Saint Petersburg, the Fondazione Musei Civici of Venice, The Mathaf - Arab Museum of Modern Art and the Museum of Islamic Art of Doha, and with the creative interpretation of contemporary artists such as Thomas Demand and theorists such as Marco Giusti and Nicholas Cullinan.

The exhibition documents, through special projects, the ongoing dialogue with international museum institutions, establishing creative exchanges between their collections and the interventions of contemporary artists.
For this purpose, Thomas Demand was asked to respond to important materials drawn from the Musei Civici of Venice, just as Jean-Paul Engelen, director of the Public Art Museums of Doha, Qatar, was invited to build a linguistic bridge between a historical artifact from the Museum of Islamic Art and the work of the contemporary artist Buthayna Ali. Similarly, the Hermitage Museum of Saint Petersburg will present some unpublished 18th-century ceramics alongside Jeff Koons’ Fait d’Hiver (1988), while Nicholas Cullinan, curator of International Modern Art for the Tate Modern of London, has been tasked with going through the collection and giving his interpretation of Italian art from 1952 to 1964, a period that includes works by Alberto Burri, Enrico Castellani, Lucio Fontana, Francesco Lo Savio, Piero Manzoni, Salvatore Scarpitta and Mario Schifano.

On this occasion at Ca’ Corner della Regina the encounter of Western and Congolese cultures that led to the construction, in London, of The Double Club by Carsten Höller in 2008, will be represented by unveiling a volume fully documenting this project. The interaction between different arts of motion will be featured in the section curated by Marco Giusti, who relates the films of Todd Solondz with the claymation videos of Nathalie Djurberg.

All in all, an ensemble of presentations and crossovers bearing witness to the fluid interrelationship between modern and contemporary work, the first steps that the Prada Foundation will take into the future.
www.fondazioneprada.org