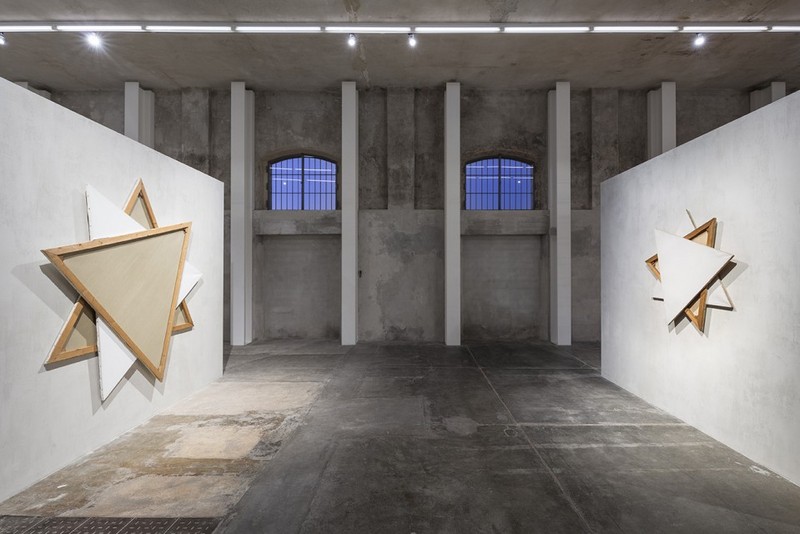 The thematic exhibition “Recto Verso” presents artworks that consciously foreground the hidden, concealed or forgotten phenomenon of “the back.”
It was conceived by the Fondazione Prada Thought Council, whose current members are Shumon Basar, Elvira Dyangani Ose, Cédric Libert and Dieter Roelstraete.

“Recto Verso” continues an approach from the preceding Nord gallery exhibition “In Part”, curated by Nicholas Cullinan, whereby a latent theme is detected in the Prada Collection, and then expanded with loaned works from international and national institutions. In this way, the Prada Collection is thought of as an open resource whose potential provides new interpretations of the present.

The Western art tradition has mainly conceived of paintings as frontal (“recto”) artifacts. The back (“verso”) carries significantly less cultural meaning, destined to remain beyond the public’s view, and only visible to the artists themselves or staff at museums and galleries.
In this exhibition, artists over the course of two centuries to today counter this convention by flipping the back to the front.

For example, in some works in the exhibition, the trompe-l’œil technique, made famous by 18th-century Flemish painters, is used to focus attention on the frame rather than the picture. In these artworks the back is represented through both the technique of painting, as in the case of Louis-Léopold Boilly, Roy Lichtenstein and Luca Bertolo, and photography, as exemplified by Gerard Byrne, Thomas Demand, Philippe Gronon, Matts Leiderstam and Ian Wallace.
The marks that the artists leave on the back of a painting can be diverse in nature and their intentional revelation of non-visible content can vary: from the explicit message of protest shown by Gastone Novelli during the 1968 Venice Biennale, when he exhibited one of his paintings reversed, like a wall on which political slogans could be written, to the inclusion of actual images on the back of the canvas, as can be seen in the works by Llyn Foulkes and Giulio Paolini. These only become visible when they are turned around, thereby calling into question the ascendancy of the recto over the verso.

When the back of a painting began to become a subject for artistic research, the confusion between the two surfaces began to shift towards a fusion proper, as in the processes of combustion carried out by Alberto Burri. The structure of the painting may also take center-stage: Sarah Charlesworth’s double-exposure photography sees through the work itself to emphasize the structural and physical features of the represented object.
Whereas Carla Accardi replaces canvas with transparent plastic, thus revealing the otherwise hidden structure and the wall behind, in recent years Pierre Toby has used glass for the same purpose. In the works of Pierre Buraglio and Daniel Dezeuze—close to the late- 1960s French art movement Supports /Surfaces—the picture plane vanished completely, leaving only the support material.

The disposition of works in Nord gallery continues the theme of reversal and reveal. A number of pieces are suspended between the dividing walls, transforming what is normally presented as flat and two-dimensional into sculptural and three-dimensional, allowing visitors to circle around.
www.fondazioneprada.org