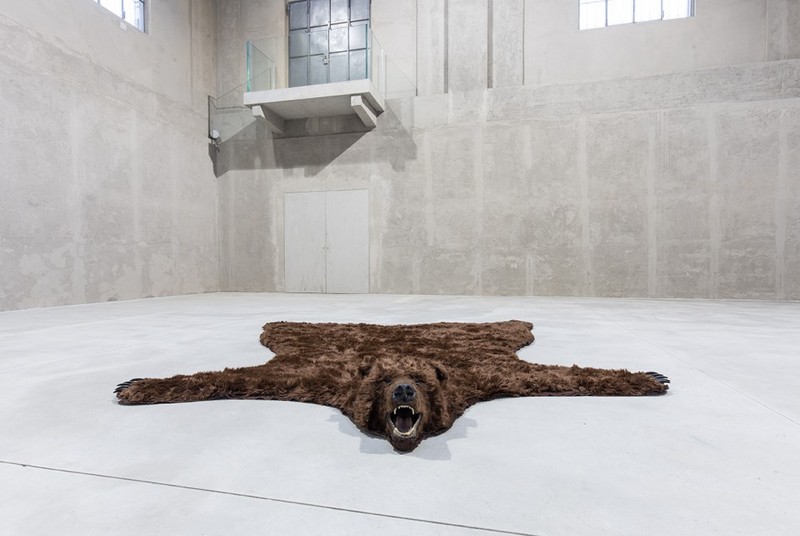 The spaces of the Cisterna – a preexisting building made up of three adjacent vertical structures, which once contained enormous cisterns that produced distillates – host “Trittico”, a dynamic display strategy devised by the Thought Council (Shumon Basar, Cédric Libert, Elvira Dyangani Ose, Dieter Roelstraete). Three carefully selected works from the Collezione Prada are installed at a time, periodically rotating.

The second selection in this series includes Untitled (2002) by Tom Friedman, Lost Love (2000) by Damian Hirst and Pinne di Pescecane (1966) by Pino Pascali. This iteration of “Trittico” is a narrative continuation from the first, which presented Case II (1968) by Eva Hesse and 1 Metro Cubo di Terra (1967) by Pino Pascali alongside Lost Love: three cubes of ordered disorder. Now, it is as if the cube were smashed, and entropy leads to ambiguous borders. Hirst’s contained ecosystem is now flanked by Friedman’s scattered motion of plastic pictograms and Pascali’s dark, ominous shark fins swimming under your feet.

From 18 November 2015 to 10 January 2016 the Cisterna will present the third selection of “Trittico”. Reflecting on the theme of the representation of the animal world, the works Did you know I am single too? (2014) by Paola Pivi and Turisti (1997) by Maurizio Cattelan will be on display along installation Lost Love (2000) by Damien Hirst.

The aim of the “Trittico” display initiative is to highlight a number of ideas. The first is that our experience of a work of art is always relational, understood through other works, either from the past or from parallel times. The second idea is that a collection such as the Collezione Prada contains many hidden histories of interpretation that exceed orthodox accounts. By focusing upon three works at a time, “Trittico” prises out unexpected patterns between seemingly dissimilar artists and their works. Lastly, it also underlines the importance of encountering artistic works in the first person, under conditions quite different from those of a museum. Here, visitors are immersed in a tangible three-dimensionality, a rarified illumination — characteristics that no technological device can yet reproduce.
www.fondazioneprada.org