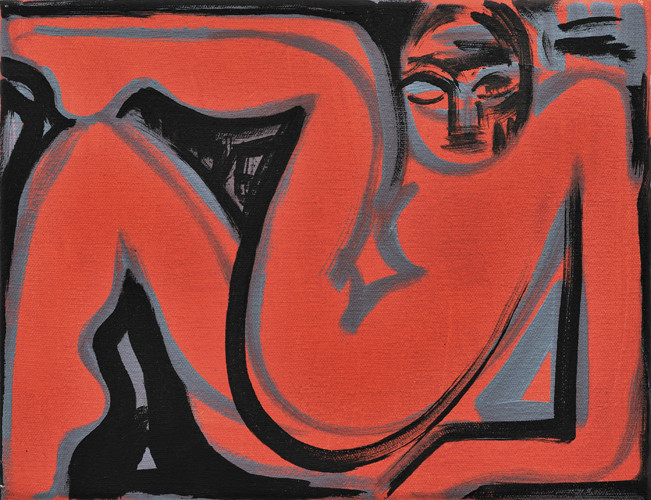 BABY GOT BACK
Praz-Delavallade is proud to announce the fist solo exhibition in France of Los Angeles-based artist Amy Bessone.

With the exhibition, Baby Got Back, Amy Bessone restores nude painting to its rightful place in the foreground of the art scene. The porcelain miniatures that functioned as ‘models’ in Bessone’s earlier work have been replaced by a conceptual take on the model that embraces the entire sweep of the artist’s approach to form, representations of the female body, and her particular relationship to the picture plane. Reminiscent of the works of Matisse and Picasso, as well as Kirchner’s baigneuses or the quality of Max Beckmann’s line, voluptuous women spring into life out of monochromatic backgrounds of citric yellows, magenta and orange. This electric palette is itensified by accents of metallic silver, used for instance in the masks that take an important place in this exhibition and refer to the modernist interest in primitive art. The artist’s use of strong black lines brings to mind calligraphy and ink drawings. Bessone describes herself as particularly interested in Hitsuzendo, a form of Japanese calligraphy which invokes the movement of one’s entire body and is inspired by sword exercises; a manner for Bessone to transform her brush into a cutting arm ready to carve up pictorial traditions.

But Amy Bessone draws her inspiration not only from modernism and zen culture, figures like A.R. Penck and Keith Haring and American pop culture itself serve as a repertoire of forms and ideas of equal importance. Thus, in this exhibition we encounter a series of paintings falling under the moniker of “Punk Nudes”. A term devised to illustrate a way of painting, a form of line born of more spontaneous gestures, than are to be found in the artist’s previous series. Less attached to illusionistic technique, these new painting easily can be linked to the rapidity, rebell attitude and the simplified instrumentation which is characteristic of punk rock. Bessone continues to borrows from the musical lexicon when she speaks of “riffs” or “variations” on nudes to speak about her paintings.

That it is a woman who is bringing back the nude as a subject, is far from insignificant. The place of the female model and the pictoral tradition of the nude as determined by the male artists’ gaze are at the heart of this series. The juxtaposition of the “punk” gestures and) this aforementioned historical and formal heritage is clearly to be understood as an attack. But the work can equally be read as an Ode to her antecedants.

The title of the exhibition, “Baby Got Back” has multiple meanings: at once on a personal level, as the artist lived in Paris from 1989 to 1993, but also on a historical level, in relation to the role of importance which the works of early twentieth century masters take in this series, and finally on a sociological level: “Baby Got Back (I Like Big Butts)” is also a Hip Hop song which topped all the charts in 1992 and which simultaneously articulates messages of objectification and liberation of the female body.

Amy Bessone’s work is currently on view at the Rennie Collection in Vancouver. Her work has been included in “Beg, Borrow and Steal”, aswell as “Red Eye: L.A. Artists from the Rubell Collection” at the Rubell Family Collection in Miami and in “Collection: MOCA’s First Thirty Years” at MOCA in Los Angeles. Amy Bessone was born in New York in 1970, today she lives and works on Los Angeles.
www.praz-delavallade.com