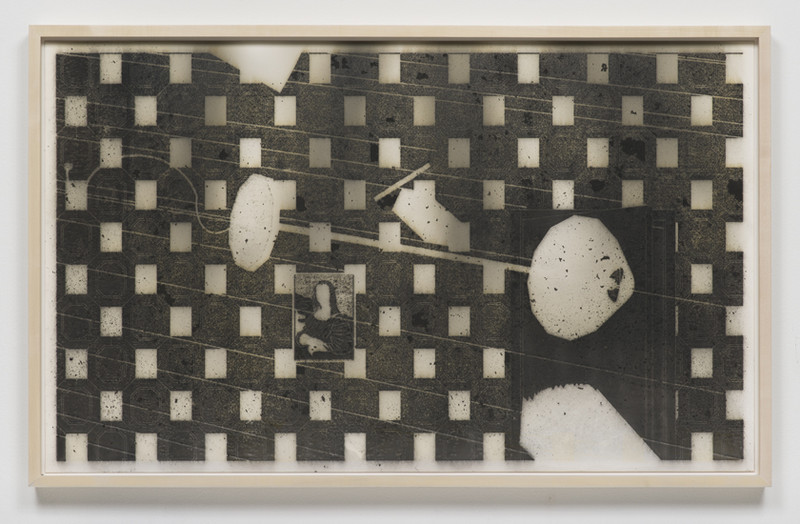 Praz-Delavallade is proud to present the fourth solo exhibition of Los Angeles and New York-based artist Analia Saban. Over the last ten years, Analia Saban has been interested in deconstructive processes. By exposing process and materials, and by dismantling artworks of various media to later reassemble them in unconventional ways, the artist reveals the artwork’s existence as both a physical and a social construction.

Titled Outburst, this new exhibition juxtaposes two new bodies of work pursuing similar concerns. The Big Bang Series (in Ten Steps), a piece in concrete and marble on canvas, references the explosion and expansion of the universe, while the ensemble of eight one-point-perspective laser-sculpted graphite drawings, Outburst (Living Room), emphasize the emotional outbursts that could happen within the domestic space. While the use and showcasing of perspectival lines accentuate the presence of the vanishing point and clearly link the two bodies of work, there is also an evident contrast between the toughness and heaviness of the concrete works and the fragility of the laser-burned paper.

With Outburst (Living Room), a laser-sculpted drawing piece in eight parts portraying an explosion within an interior domestic space, Analia Saban shows us an image of organized chaos. Combining the new technique of a laser machine with the traditional practice of perspectival rendering using graphite on paper, the artist intentionally carves out and burns the paper to create fragile drawings of negative space. In these depictions, the shelves of a bookcase have exploded and the books are frozen on a grid that extends from a vanishing point. In the main scene, we are reminded of Paolo Ucello, whose battle scenes use the system of perspective to draw out the horrors of chaos. Three other drawings represent close-ups of some of the objects that are floating in the air during the outburst. Facing these works, Saban presents a new series of negative imprints resulting from the laser-sculpting process, creating a spatial play between positive and negative. Acting as support or container of the charcoal and paper residues from the process of burning, these negative imprints are also reminiscent of the early photographic technique of the photogram or sun print – the intact and therefore opaque parts operate as an object would, when placed on photosensitive paper, and the laser that had become a cutting device comes close to its true nature: that of light itself.

In the second body of work presented in the exhibition, Big Bang Series (in Ten Steps), Saban offers a rational counterpoint to the tumult of the Outburst series. This piece is part of an ongoing exploration of wall pieces comprised of concrete slabs affixed to canvas. The concrete which could have served as the indispensable foundation of a house, is rendered useless and elevated at the same time when incorporated into a work of art. In this case the aggregate of particles of sand and marble stone that is visible in the first piece of the series, slowly but steady densifies as the marble gradually fills up the entire canvas space. Playing with the opposing phenomena of control and chaos, Analia Saban’s work leads us somewhere in between casualness and a desire for total control. The attraction of these works lies in their formal rigor: through technique they have taken control of the intrinsic chaos.