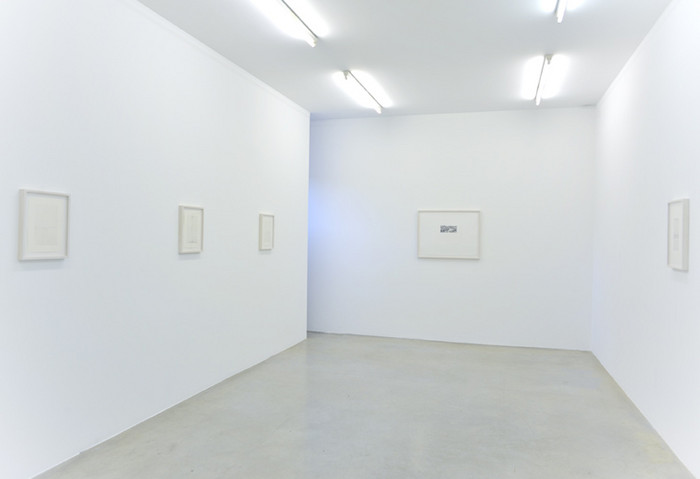 An Eloquent Woman is an exhibition that circles around the relationship of three women: a revolutionary, a historianand an artist. Emma Goldman was a radical feminist and anarchist revolutionary who in the early 1900’s became knownfor her political activism, writing and speeches. She was a proponent of workers’ rights, women’s rights, prisoners’rights, free love and anti-conscription. This exhibition uses as its inspiration a series of passionate love letters written byGoldman 100 years ago, from 1908 to 1917, to her lover at the time, Ben Reitman, who was 10 years her junior. Thesum of the works in the exhibition existentially investigate the pain and struggles in trying to live out one’s political idealsin one’s personal life. Bowers questions how one reconciles her political beliefs in the intimacy of private life and lookstoward Emma Goldman and her archivist, Candace Falk, as role models. The exhibition contains a new single-channelvideo, a series of drawings, workers’ rights protest posters and a sculpture based on a social intervention.

The new 20 minute video, also titled An Eloquent Woman, was begun over a year ago while researching at The EmmaGoldman Papers at the University of California, Berkeley. Bowers became compelled by the Founder and Editor,Candace Falk, because of her intense dedication to archiving and understanding the life and work of another woman.This video expands on Bowers’ belief in the importance of storytelling as a feminist tradition and an alternative to thecanonized record of history. Her continued exploration of the 1970’s feminist mantra, “The personal is political” iscentral in this piece as both Goldman and Falk insist on the messy but empowered existence gained from entwining thereal woman and the public figure with political radicalism. This video scans at great detail through Goldman’sexpressively scrawled handwriting where we can only catch glimpses of words. Floating between abstraction andlegibility, the privacy of love letters is kept intact while asking us to expand our notion of the gesture and freeexpression. Candace Falk narrates the video and focuses on the interrelationships of Goldman, Reitman and theHaymarket Martyrs, a group of anarchists hung by the United States for a bombing in Chicago at a workers’ rightsprotest. They were later found innocent. The video was shot in two locations: super-8 film at the Waldheim Cemetery inChicago and video of Goldman’s love letters at the Emma Goldman Papers.

A new series of drawings further investigates the personal and political underpinnings of gesture and mark-making; ahistorically masculine style of working is redirected into feminist discourse. Bowers uses Goldman’s love letters as asource for her new drawings where she subjectively selects sentences and clauses to draw. The autobiographies of thetwo woman overlap through Bowers’ meticulous copying of Goldman’s handwriting. Included in the exhibition is aphotorealist drawing of an archival picture of Emma Goldman lecturing about a women’s right to birth control whilestanding on a truck in a huge sea of men in Manhattan. She was later arrested and jailed for this speech.

Additionally, Bowers has made a large edition of political posters with spray paint and gift wrapping paper based onworkers’ rights protest slogans. Many of the declarations come from Goldman, the Haymarket Anarchists and theInternational Workers of the World. Slogans from contemporary protests have been included as well. For example,“Quand on n’aura plus de pain, on mangera de la brioche” was recently displayed on a protest sign by ClaudineChettab, a laid-off purchasing agent at a workers protest in Paris on March 19, 2009. Bowers will be delivering Briocheto a union office each week of her exhibition.