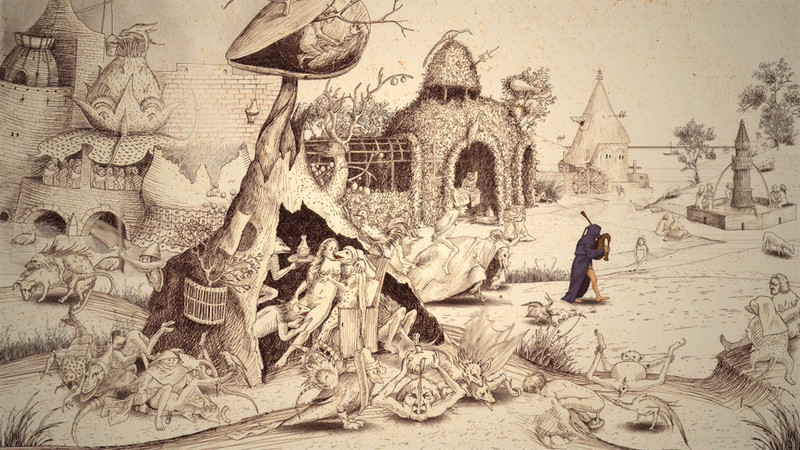 For his first exhibition at Praz-Delavallade, Belgian artist Antoine Roegiers presents his latest work, a series of drawings and a video installation inspired by «The Seven Deadly Sins» by Pieter Brueghel, made in the sixteenth century. Mastering pen and ink drawing techniques with the same ease as digital tools, Antoine Roegiers has been engaging in a dialogue with the great masters of Flemish painting, and the fantastical universes of Hieronymus Bosch and Pieter Brueghel in particular, for the past several years.

For this exhibition, Antoine Roegiers shows a video installation composed of seven screens that each presents a narrative animation related to pride, lust, gluttony, envy, sloth, greed and wrath, along with a series of sixteen drawings that are in fact the storyboards the artist has imagined and entirely redrawn in ink.

What interests Roegiers in Brueghel’s 1558 version of «The Seven Deadly Sins», besides the poetry, creativity and beauty of those drawings, is the flat representation of a whole story. Even though these drawings depict great spatial depth, they are designed like a movie whose scenes are mounted in one single sequence, which must then be abstracted to be able to read and interpret the work.

Through animation techniques, Antoine Roegiers creates a space for the viewers to penetrate into and beyond the drawings. His steady and light pencil lines, dissect each character, each piece of scenery, as if to reveal the singular poetry of a universe both comical and disturbing, surprising and captivating, in which men, women, animals, demons, metamorphosed creatures, hybrid characters, giants, and fanciful architectures coexist in a delirious, but perfect harmony. Freely navigating these drawings, the artist chooses details of specific scenes, imagines the character of a figure and invents the continuation of an action or movement.

Antoine Roegiers designs and produces every step of the creation himself. He has collaborated with Antoine Marroncles, who has created the soundtracks of his videos since 2005.