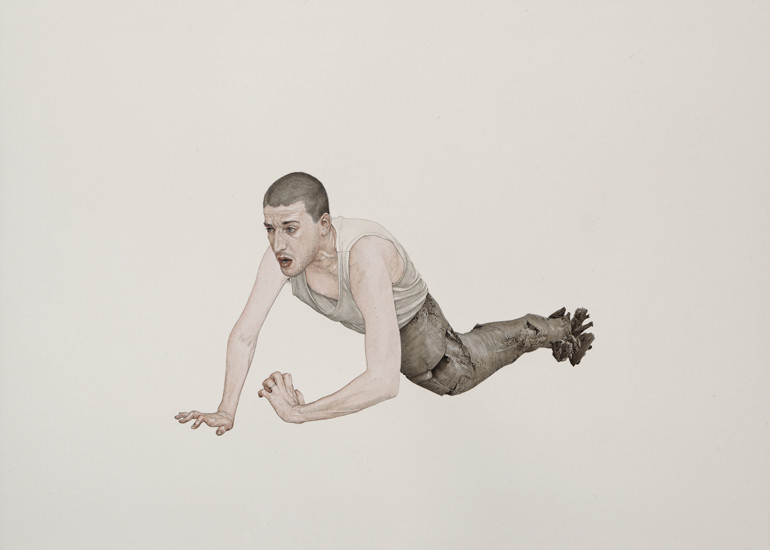 An Experience Between Bliss And Abyss

“My life follows the course it has been assigned from above”. These words pronounced by Albrecht Durer on the eve of his own wedding could well apply to the youthful Fabien Mérelle who recently became a father. Do we read there a special correspondence between the two artists, separated otherwise by five centuries?
“Carefully observe Nature”, wrote the Master of Nuremberg. “Let it guide you and do not stray. The more your work resembles the living form, the better it will be judged”. This is where art transcends personal feeling. Transmitted and learned, it is fertilized by the immense wealth of images gathered from that long adventure which is art, as well as from the most insignificant glimpses. The proximity Fabien Mérelle cultivates with his surroundings informs his graphic character, as a musician would draw from familiar sounds. He turns his daily life into a mirror in which hand and line will blend.
We see there the fruit of a parcourse begun back in his time at the Beaux-Arts, a reflection upon the paradigm represented by form as well as by the élan the subject inspires in him. The pleasure his work distills stems not just from its bravura but must be perceived, in the Freudian sense of pleasure as being both sexual and esthetic. “That mysterious treasure gathered deep in the heart is poured out through the artist’s work”. Fabien Mérelle’s own inner world springs forth. An innate empathy for the immediate produces the méli-mélo, teeming with figures, a ménagerie of familiar forms, daily surroundings and domestic routine in which he displays (with or without premeditation) his own drives and struggles, the grain of the paper itself serving as the metaphor.
But while the technique is flawless, the subject escapes its creator, who becomes a mere toy, a bit like the Jokari rubber ball that mocks the laws of motion. In spite of the mastery of his line, the result defies the artist’s direction. A painful challenge to be sure for he no longer controls his drawing, worse, even his own destiny. He becomes the victim of this emotional trajectory. The mask drops, pretense crumbles. What is left as the last trace of a previous life is this skin colored, modest and surreal, ultimate translation of the artist’s quest for a bridge between bliss and abyss.