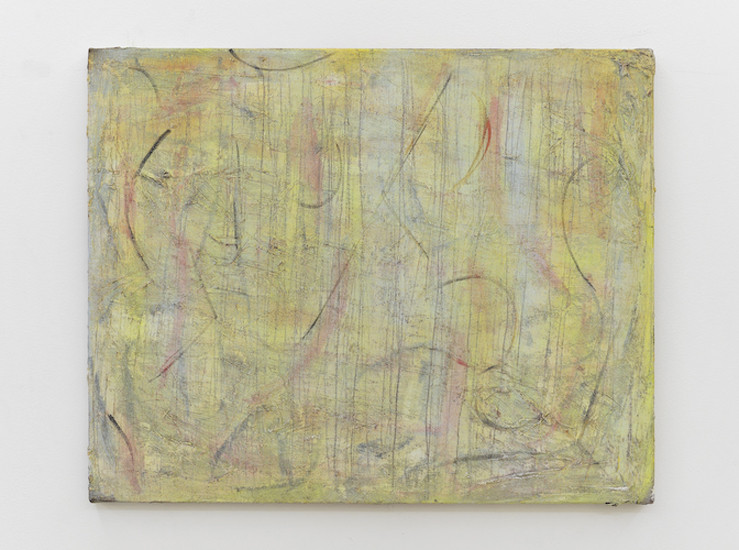 Praz-Delavallade is proud to present the first exhibition in France of Gabriel Hartley, «Slap», that will comprise a new set of oil and spray-painted canvases.

Gabriel Hartley’s paintings strike the viewer with immediacy and vigour. Even though the paintings are heavily worked, they avoid incertitude. The paint is scraped, scored, cut and allowed to congeal, but the use of carefully applied spray paint helps to mask and flatten the surface, while paradoxically, highlighting the blemishes. The spray paint acts as both a concealer and an enhancer. The show’s title «Slap» draws on this dichotomy: you can think of a slap in your face, but also of the British expression «to put some slap on», meaning the use of makeup.

Hartley’s concise one-word titles always hint at different readings of these seemingly abstract paintings: like «Teeter» which refers to the vacillating attitudes or positions, as well as the physical appearance of the paintings, where they at times look as though they are on the verge of dissolving. «Pick» draws on these different readings as well, as it suggests an allowance to pick what you want to see. Again while also referencing a physical act, the paint being picked at; a process not generally associated with painting. «Pound» also draws on an action more commonly associated with sculpture, but which feels at home with the way the paint is forced into place.

Light is a consistent subject matter in Hartley’s paintings. From references to the evanescent radiance of Turner or Monet to the digital glow of computer generated imagery, a history of light effects seems to be interwoven in all of the paintings. This is extended into his other practices. His sculptures are formed from color paper that is torn and folded, and then set in resin. They mix the heaviness of metal with an ethereal quality. His recent series of digital prints is made by crumpling up drawings, paintings and pieces of paper, scanning them, and then printing them on colored paper. This complex regime echoes the actions used in the production of the artist’s other media.

Gabriel Hartley (born in 1981), lives and works in London. He holds a BA from Chelsea College of Art and Design, London and a Post Graduate Diploma from the Royal Academy Schools, London. He is represented by Praz-Delavallade in Paris and Foxy Production in New York.
www.praz-delavallade.com