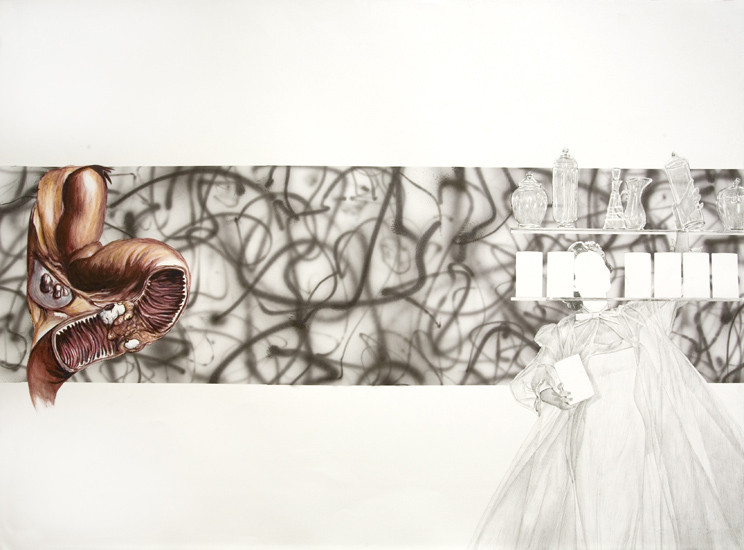 Jim Shaw belongs to a generation of American artists who have influenced the culture on the West Coast since the late 1980s. His work is full of elements of American popular culture and countless references to so-called highbrow culture.
His evolution has taken the form of cycles, developing an original and discontinued narration through several series whitin he creates complex pseudo-worlds that he conceptualizes in content and style.

In the late 90’s, he began an unbelievably compact project: the creation of a pseudo-religion called O-ism. This cycle relates the history of an imaginary religion fantasized by the artist and inspired by the unlikely religious movements that appeared in the US during the 19th century. By developing an entire artistic cosmos that documents such a religion, he sets an aesthetic frame in which he depicts every conceivable activity of the adherents of this religion. He has created a fascinating pseudo-reality in which the countless references cross-fertilize each other and constantly develop new meta-levels.
The exhibition at Praz-Delavallade presents his newest series of works connected to the development of a Prog Rock opera. This opera is an ongoing project that related the precise incidents that make up the book of “O”, the prehistory that was channeled by it’s creator, an upstate New York Feminist in the 1830s.
Jim Shaw decided to make a parallel series of comic stories from the four classic ages of US comic books (1940s super heroes, 1950s expressionist crime and horror, 1960s corporate hyper-rational and censored super heroes, and 1970s wild and uncensored underground comics), that would encapsulate versions of the thematic content of the Prog-Rock opera’s 4 album sides.
Stellaktite and Stalagmite, a set of 18 comic boards, constitutes the first chapter of the Thrilling Stories from the Book of “O”. In the first 1940s golden age superhero comic style, Jim Shaw relates us a main event in the Oism genesis: the arrival of “I”. A thousand years ago, a vast, wealthy civilization has developed in the adoration of goddess “O”. This feminist society expanding into a successful but rigid hierarchy is centered on the priestesses of “O”. In this blossoming time, one of them, our heroine acquires vague superpowers through an accident of timing and bringing from another dimension a second deity, the negative masculin entity “I”. This one introduces egotism, greed and corruption to this utopia and causes the first disastrous result: a cataclysm of earth.
This cataclysm is the subject of the main piece in the exhibition: a very large wall mural expanded from one of the comic’s splash panels, with cut-out crystal formations. Drawn in black and white in the style of political cartoons, this vision combines worlds chronologically and culturally very far apart. He draws a parallel between superheroes and attributes of comic characters with stylized bodies and fantasy world of the originator of comic storytelling, the pre-romantic painter William Blake.
In the exhibition he will also present a series of drawings that incorporate Oist and 50‘s comic iconography as well as Anatomy Weird-ohs based on medical illustrations of diseased organs by Dr. Frank H. Netter. A large graphite drawing representing one of the main O-ist symbol: the Banyan Tree, a kind of Oist version of the tree of life, one that goes in and out of accepted reality and gravity, the up becomes down.
By letting himself be inspired associatively and going overboard with references, Jim Shaw succeed in the creation a whole universe that continually enhanced as he keeps going in his construction.
www.praz-delavallade.com