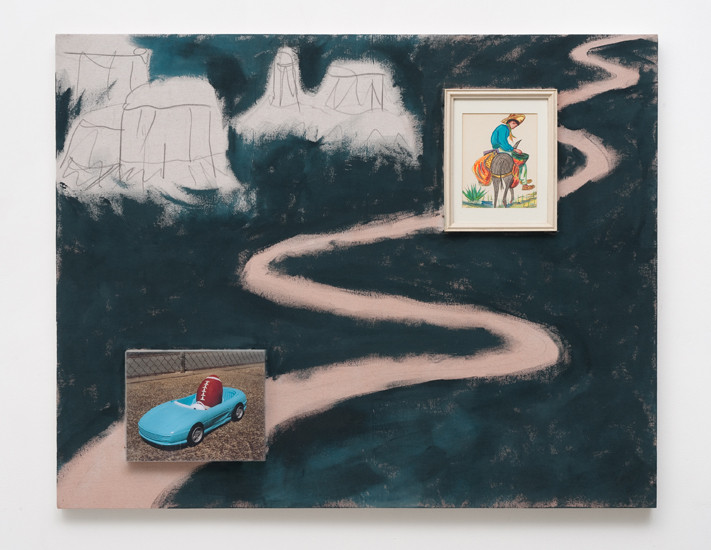 Praz-Delavallade is pleased to present Joel Kyack’s first exhibition with the gallery, ‘Point at The Thing That’s Furthest Away’. With a particular humor as his consistent material, this show expands Kyack’s project-driven, bricolage practice into seven new paintings and one fountain.

‘I moved into my present studio a year ago, one block from two large thrift stores in a primarily industrial neighborhood of Los Angeles, a thin sliver of land nestled between a river and a railroad and a highway. These stores (and the streets surrounding them) become regional way stations and dumping grounds for unwanted things deemed too much of a pain-in-the-ass or worthless to sell. I began a daily ritual of wandering these stores, monitoring their inventories for objects of interest as potential inclusions in future work.

Learning the rythms of the stores’ particular stocks, I was drawn to their collections of framed images. Frequently rotating, these images range wildly, from original drawings to posters, from awards to memorabilia, from studio portraits to framed advertisements. These framed images began to find their ways onto canvases, re-contextualized within paintings that aimed at humorous, energetic, gestural efficiency and play between the painted canvas and the framed image.

I’m interested in the frame changing the importance of that which it frames, allowing an individual to express or underscore an interest or value by formally re-presenting it. The frame signifies that it is finished and of certain quality, ready for the world-at-large to potentially consume. It locks it down. The paintings free the images from this stasis by using them as raw material in a larger context. This situates the process of making, referencing, and borrowing at center stage. It shines a bright, unashamed light on it. It opens up a conversation about the root of inspiration and interpretation.’

Joel Kyack is an artist living and working in Los Angeles. Recent solo projects include ‘Escape to Shit Mountain’ at François Ghebaly, Los Angeles; ‘River / Stream / In-Between’ at Kate Werble, New York; and ‘Superclogger’, a public project produced with the Hammer Museum and LAXART, Los Angeles. Recent performances include ‘Growing Pains Leave Stains’ for Kaleidoscope at MACRO Testaccio, Rome, and ‘Wattis up with this guy?’ at the Wattis Institute, San Francisco. He received his BFA from The Rhode Island School of Design, attented Skowhegan School of Painting and Sculpture, and received his MFA from the University of Southern California. His works are part of numerous public and private collections, amongst others the Rubell Family Collection, Miami.
www.praz-delavallade.com