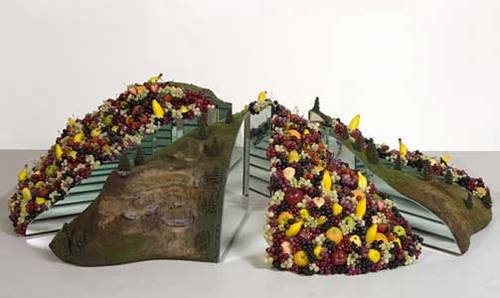 JOHN MILLER
"Back To The Garden"

The exhibit in Praz-Delavallade will feature four landscape sculptures and 200 photographs from “The Middle of the Day” serie.
The landscape sculptures belong to a group of works that use the cornucopia -- almost always just fruit -- as a trope. I see the aggregation of fruit as a displacement of the brown impasto motif I used in earlier work. Although a profusion of fruit is ostensibly bountiful, in some ways I find it more grotesque than a straightforward allusion to excrement. That I use plastic fruit is important too. The utopian promise of the cornucopia contrasts with the dated and tacky aspect of its elements. My approach here is in part inspired by some of Giorgio de Chirico's late still lifes. In these he conflated foreground and middleground space, so the image could be read either as a landscape behind an ordinary fruit arrangement or as giant fruit set within a landscape. Yayoi Kusama’s use of repetitive elements also informs my understanding of the cornucopia as a kind of obliteration.
All the photographs are part of an ongoing series I started in 1994: “The Middle of the Day.” These I shoot between 12:00 and 2:00 pm. Paradoxically, the subject of all these images is time – or, more precisely the social designation of time, something more or less abstract and invisible. I chose this time because it is my least favorite time of day. After I started the series it became clear to me that one reason for my dislike is that, in many cultures, this time is ill-defined and ambiguous. In New York, for example, under the Protestant work ethic, the demand to work and the desire to rest collide. Here, too, de Chirico was an inspiration, especially his piazza paintings in which, owing perhaps to the siesta, deserted squares stand our in broad daylight, right in the middle of town. (Michel Leiris even equated high noon with death.)
Clearly, the landscape sculptures are allegorical. Appearances to the contrary, the photographs are no less so. In my installation, the viewer will be able to read these scenes both into and out of the sculpted landscapes.