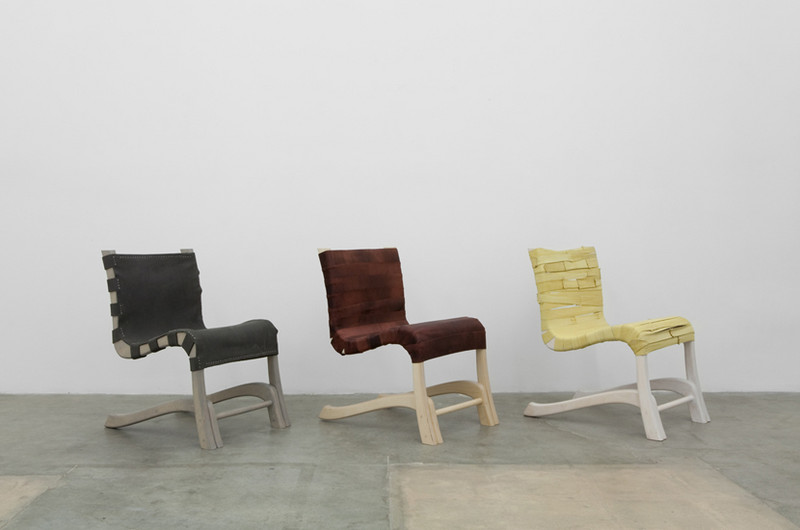 Praz-Delavallade is pleased to present its second solo exhibition with work by Los-Angeles based artist Julian Hoeber. The show will include five new pantings from his on-going series «Execution Changes», a set of drawings and three chairs that are part of a new furniture design project.

GPD: Comparing your actual show to your last exhibition at the gallery here in Paris (2009), there are similarities, but you have also undergone a big step towards a new project. One might think of Frank Stella first seeing your paintings, but your new series also makes use of Sol Le Witt’s idea of the concept as a quasi-automatic machine to produce an artwork.

JH: I’ve been thinking of Sol Le Witt since the beginning. After seeing a group of his wall drawings, I started thinking about procedures for dividing up a composition. One of the things I’ve always felt about Le Witt, is that there are a lot of things that his apparent rigor leaves to the side and never deals with. His very clean, rational style pretends towards a kind of neutrality, but of course we know those are aesthetic choices. It seems to me that the very subjective nature of these aesthetic decisions has always been swept under the rug. «Execution Changes», the current series of paintings I’m working on, is based on a system for dividing a rectangle, able to generate several thousand unique compositions. What interested me was to set up a conceptual system, but really lean on the subjective part. So the compositions are conceptual, but the execution is very subjective.

GPD: By doing so you manage to confront the often deskilled practice of minimal and conceptual art with the love of studio practice and the need of creating something with ones own hands. Indeed within this systematic approach, you tend to explore irregularities. The regular grids are splashed with expressive details and you use a very gestural facture, with thickly built-up surfaces.

JH: Agreed. Just as a a drawn line is always actually a shape, a painted plane of color is an object. The paint has thickness, it’s just a matter of if you want to do something with that. You can hide it or you can enjoy it and I enjoy it. I hadn’t painted in ten or twelve years prior to this project and I’d forgotten just how much painting seems to be running the show when you’re doing it. I feel less in control of certain things when I’m painting. It’s a little like trying to control your hand-writing or the way you walk. You can do it, but it feels sort of awkward, and you can only maintain it if you have a really good reason to. The messy character of the paintings is a byproduct of the fun I have. In this show in particular, a lot of the paintings are painted and then repainted. So I went back and reworked things and for me I’m not sure I’d know how to do that and keep a clean surface. A lot of the expressive details really come from frustration and a constant need to work things over. Some of the work I made in the past required so much care and precision that it felt like there was a lot of telling myself «No» in the process. Now I figure if I want to color outside of the lines I’m allowed to. The project sets up rules and then allows me to break them. There is pleasure in having a structure, to make sense of the design of the painting, and then the freedom to be careless while making the structure visible. And I like all of the ways that process reminds me of my particular psychological state.

GPD: And psychology and specifically your own psychological state have always played a key role in your work, right ?

JH: My psychological state of course always informs how I’m working. What I am referring to specifically here, is how making rules only to break them, and taking pleasure in crossing boundaries, seems like a model of rebelliousness, both infantile and adolescent. The aesthetics of conceptual art has always been rather clean and it seems we associate intelligence with the ability to contain oneself within boundaries - rigor, as so many artists like to call it. I like the idea that there can be a kind of intelligence that gets messy. I like that my work points to a psychological state that allows for integration of both the rigorous and explosive, sloppy tendencies and a healthy play between conscious and unconscious impulses.

GPD: Your frames give your pantings a very object-like character though. Is that intended?

JH: My framer told me that some other artists he works with said I wasn’t a painter, but that I was making sculptures of paintings. I’m fine with that idea. I’ve also been able to use the frames as a way to connect the paintings a bit to the furniture projects I have been working on lately. If the paintings can feel like objects a bit and have a motif that connects them to the furniture, then you can feel your own presentness in space between them. I came to abstraction through a love of the way the work of artists like Bridget Riley and Fred Sandback made me feel acutely aware of my own body in space.The surfaces of the paintings, their quality of taking up space, the frames, the way the show is hung, and the furniture are all ways of connecting your whole body to the experience of looking.

GPD: Could you tell us how it comes that you started to work on furniture design projects?

JH: I started making furniture because I like furniture. I like chairs. I think a lot of artists make furniture and call it sculpture and then we all have to dance around the fact that it just isn’t very good furniture most of the time. There’s this hierarchy that says design is somehow less important or less intellectual. I think that’s ridiculous. It’s harder to make a good chair than a good piece of contemporary sculpture. I enjoy the challenge of it. I also like the way I can effect a viewer’s experience of the paintings and of space. I like being able to ask a person to place their body in a particular way. I also want the furniture to allow the aesthetics of the paintings and other flat work to move into objects and into real life. Paintings almost always give the feeling of being elsewhere than where the viewer is. Even a Ryman painting seems to separate itself from us by being on the wall. Maybe Buren really solves that problem as a painter, but it’s a rare trick. Chairs though... they are where you are. You’re within them and they are more intimate than a painting can be. I like that about them very much, and perhaps the way the show is put together they will allow the paintings to become more intimate.

GPD: «Claire (Extracted)», the photograph presented in the exhibition comes straight out your video «Killing Friends» (2001), which is essentially a variation on slasher films, showing the narrative of an impassive young man as he goes through a succession of cold-blooded murders. While intended to investigate the physical impact these kind of gore images have on the audience, you simultaneously uncovered the special effects creating those images. A strategy you have used again with «Demon Hill», a large-scale installation based on «gravitational mystery spots», where you gave your audience the thrill of experiencing the strangeness of the phenomenon, while concurrently giving them the right to see how their belief just had been manipulated.

JH: Yeah. For me this is always about the idea, that to tell the truth you need to admit to the lies you use to tell it. I want to give people the space to be inside the project, see a lot of how it functions. I’m not against secrets - I think an artwork, like a person - will have a private life. But I do like a certain degree of transparency. When I see works of art that try to be to closed off and try to keep you from seeing how what is emotional and mysterious and powerful is made, I begin to suspect that the power and mystery are a ruse. It’s really a strategy that connects to a pretty old school kind of realism. I hate to trot out the name Brecht because I am certainly no Brecht scholar, but it is the idea that revealing how something is made gives the viewer the space and freedom to think about what they are being dazzled by rather than to just be dazzled by it.

Julian Hoeber was born in Philadelphia, Pennsylvania in 1974 and currently lives in Los Angeles. He received a MFA from Art Center College of Design, Pasadena; a BFA from the School of the Museum of Fine Arts, Boston, MA; a BA in Art History from Tufts University, Medford, MA; and he also studied at Karel de Grote Hogeschool, Antwerp, Belgium. Hoeber has exhibited in the U.S. and Europe and his work was included in Compass in Hand: Selections from The Judith Rothschild Foundation Contemporary Drawings Collection, The Museum of Modern Art, New York, NY (2009); Panic Room - Works from The Dakis Joannou Collection, Deste Foundation Centre For Contemporary Art, Athens Greece (2007); Dark Places, Santa Monica Museum of Art, Santa Monica, CA (2006); and 2004: Planet B: The Aesthetics of the B-Movie, Palais Thurn & Taxis and Magazin4, Bregenz, Austria, among others. He has had solo exhibitions at Blum and Poe, Los Angeles; Galleria Francesca Kaufmann, Milan, Italy; and the Hammer Museum in 2011
www.praz-delavallade.com