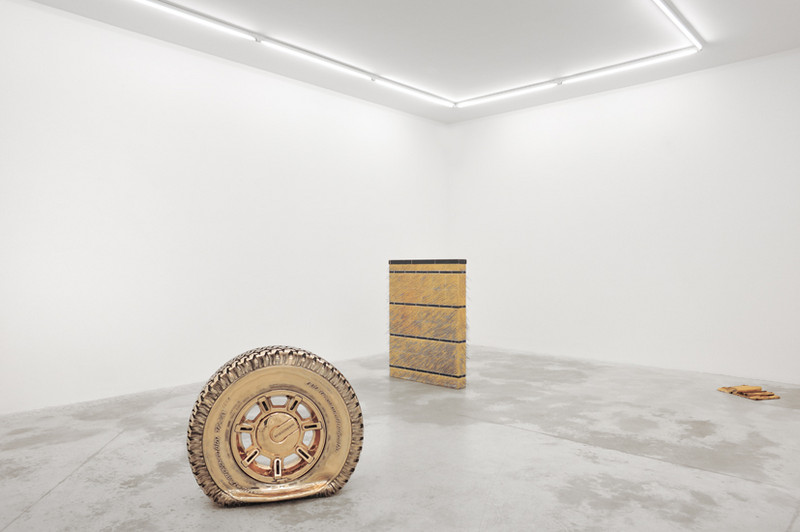 With the new body of works presented in “ A Living “, Rocklen continues his unique resuscitations of previously discarded objects. Collecting cast-off objects from the streets, dumps or thrift stores, he transforms them into sculptures charged with an eccentric delicacy that gives them a second, more poetic life.

In this case, a gold-plated phone book, a chair built out of trophies, a flat hummer tire cast in bronze, a hairy dividing wall, a recliner chair painted in faux-marble finish and a series of porcelain-cast shirts and clothes are brought together to form an ensemble that can be viewed as a portrait, a collection of objects that each point to a particular facet of a fading middle class American memory. “A Living“ consists of series of relics that temporally locate themselves in the 1990’s and explore the space between the memory of a set of familiar objects and their actual presence

Along with their symbolic and poetic value Rocklen’s sculptures also deal ingeniously with formal issues such as weight,mass and scale, often pitting giant against minuscule, or heavy against feather-light. Still retaining all the standard characteristics of the classic American easy chair, the mini recliner’s meaning and effect are altered by its proportions that are about half the size of an adult recliner and meant to suit a small child. As an object the mini recliner’s scale is particularly sinister as it is instigating early habituation of a sedentary lifestyle. Likewise the deflated dream of the Hummer, or the daily contraint of shaving disclosed by the beard that has been magnified and transplanted onto the found dividing wall now titled “Five O’Clock Shadow”, are both pointing towards the disappointments and routines brought with a certain lifestyle. This is not what is given us to see though. While cultural connotations are present, Rocklen manages to show us is the essential dignity of whatever object catches his eye.

Ry Rocklen has developed a language that is lyrical and unique; an originality that is an accomplishment considering the thousands of artists who used found objects in their works. Rather than focusing on the theoretical questionsraised by Duchamp, Rocklen’s process-based studio practice seeks to illuminate the inherent singularity of the readymade. His sculptures feel alive and animated, all infused by this sense of play and the childlike or quasi-mystical lens through which he views society’s leftovers.

Ry Rocklen is an artist living and working in Los Angeles. Rocklen’s work has been shown internationally, and has been included in several major exhibitions, including “Murmurs: recent Contemporary acquisitions” at LACMA, Los Angeles (2013-2014); “Made in L.A.”, Hammer Museum, Los Angeles (2012); “Nothing Besides Remain”, LAND, Marfa (2011); “ZZZ’S”, Visual Art Center, The University of Texas (2010); the 2008 Whitney Biennial or "Red Eye”, Rubell Family Collection, Miami (2006). Rocklen was born in 1978 and attended UCLA.
www.praz-delavallade.com