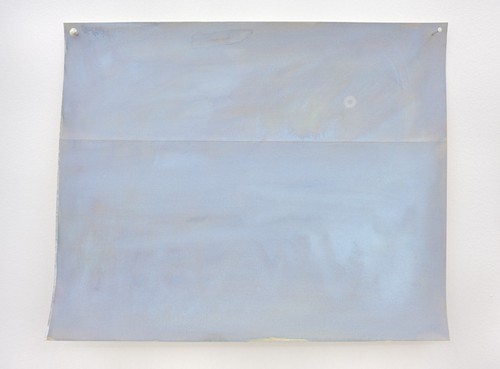 One should always take Valentin Carron’s work at face value. Bertrand (2010), a work in lacquered glass cast from his own body, offers us a rather miserable portrait of the artist: two feet, its toes showing through worn out socks. Bertrand brings to mind earlier works of Valentin Carron (that remain little known in France) that played with the stereotypes of a forlorn masculinity, such as his improbable tobacco ice cream, a gold nail clipper or leather slippers tailored to the feet of the tallest man alive. If one understands “Bertrand” in French as a generic name for the neighborhood drunk or the local outcast, his sad plight stands miles apart from the current clichés of the over-professionalized, young, financially successful and healthy artist.

We have to go back to the ‘80s to find the last incidence of the antisocial artist as a mainstream figure, which was then customarily represented as an expressionistic painter, usually an alcoholic, and preferably German. Knowing that this period also brought the advent of his younger twin, the artist as entrepreneur-cum-Wall Street trader, Valentin Carron’s seemingly conservative image is not so much reactionary as confrontational, and brings to mind Magritte’s purposely-rude Vache period, such as Jean-Marie, a 1948 portrait of a hen thief with a peg leg making a get away. Coming from an artist that claims to spend his days producing scale models of “the very things (he) abhors,” it would be a mistake not to take Valentin Carron’s acrid humor seriously. This perpetual and willful ambiguity, between statements that are obviously meant with irony and, simultaneously, demand to be taken sincerely, gives the work its uniquely unservile quality.

One of the great strengths of Valentin Carron’s work is its capacity to translate these games of moral irresolution into material and stylistic tensions which belong to the history of sculpture: the vernacular and the modern, the handmade and the industrial, the original and the copy, the institutional and the avant-garde, etc. Hence Einhorn (Unicorn, 2010), a geometric progression in four parts inspired by Minimalism, made with a standard European middle-class villa decorative element. Except that here, these twisted metal bars are clearly cast rather than the product of a blacksmith’s hand, just as are the nails, the screws and the falcon’s leg used to hang a new series of untitled works on paper which waver between atmospheric landscapes and radical, monochromatic abstractions. Valentin Carron’s work is eminently non-dialectic, and the inherent conflicts between all the antagonist terms that compose it remain unresolved. As such, the chimeras he brings into the world never cease to corner us, slightly against our will, in the uncomfortable position of ideological arbiter.