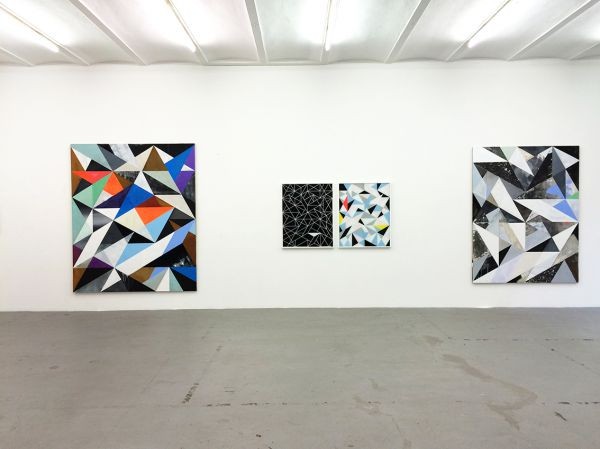 Michael Conrad's artistic work is characterized by a formal question to sculpture and painting as such. Whereas previous works primarily deal with Geometrical shapes of diamonds, triangles and parallelograms, which the artist unites to complex colored compositions. In a consistently dynamic tension, the interaction of form and content, outlines and colors construct abstract pictorial spaces.
Conrads’ most recent works emphasize a strong analysis of new techniques and methods, which partially reveal their production process.
The artist’s use of oxidizing agents that produce verdigris and rust, becomes more intense in these works. His new approach is following up a development of his complex isometric grid structures, while the angles continuously diminished over time.

Also his geometric reverse glass paintings are based on this graphic footing. While they feature a new, reduced ornamentation, the reversed production process is of importance as well.

Gloomy, nested labyrinths give way to brighter, bolder shapes. Mexican Folklore, as well as Mexican modernist architect Luis Barragán are inspiration to Conrads when it comes to color, whereas the attentive observer can also find the avant-gardism of Yves Klein and Piet Mondrian’s visual concept in Conrads' works.

This is due to the hybrid layerings of different perspectives and the use of various materials – from acrylic and oil paint to bitumen and shellac. Following the misleading paths, which are the result of the merged architectural-ornamental areas, new horizons open up through the interplay between construction and destruction. At a semantic level Conrad’s works mediate between familiar and new reference- or sign systems, by going beyond modern and postmodern avant-garde art.

Works by Michael Conrads have already been on display at the Museum of Contemporary Art, Sapporo, Kunsthaus Hamburg, the Contemporary Gallery Brüssel and at several exhibition projects in Mexico.
www.produzentengalerie.com