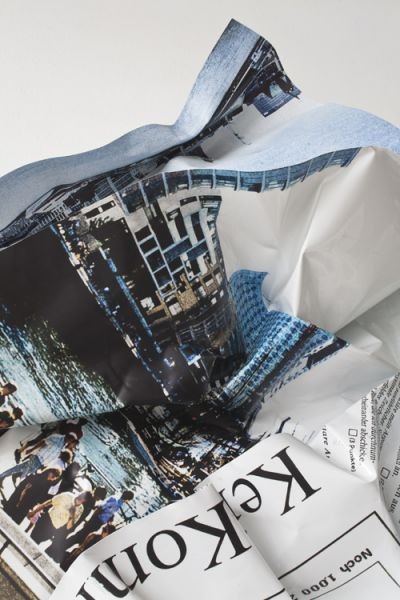 Since 2010, Olaf Metzel has worked on wall-based sculptures made from double-sided, printed aluminium sheets, which he manually distorts so that they appear as oversized balls of discarded newspaper. Articles from papers, magazines and books, across the spectrum of themes, from art and culture, through politics and sport, to popular music, are used as the source material for the sheets. Often, the themes are those heavily discussed in the media and relevant to society, those that have dominated the media landscape for a time. Examples might be the civil unrest and protests in Turkey, the tristesse of the urban housing situation in the Berlin prefab estates, or the art forgery scandal centering around Werner Spieß. Other wall- based sculptures function as media portraits of famous personalities both from the pop and entertainment industries, as well as the cultural scene: Amy Winehouse, Jimi Hendrix, the racing driver Jochen Rindt, Susan Sontag, Gottfried Benn and Rainer Werner Fassbinder have all been the subjects of such portraits.

The current exhibition presents five new wall-based sculptures in which Metzel took the opportunity of dealing with Hamburg related themes. The two works Kein Kommentar and Hafenstraße revolve, for example, around historical and current themes of the city's development. The first focuses on the 'Skandalprojekt' of the Elbphilharmonie building in the port city, under construction since 2007 following plans drawn up by the Basel based architecture firm of Herzog & de Meuron. The latter refers to the protests on Hafenstraße in the late 1980s: The street barricades of the militant squatters can be seen in the reproduction of an illustrated article from the Hamburger Abendblatt newspaper of 13th November 1987. The squatters used these means to fight against a decision of the Hamburg Senat, aimed at finding a contractual solution to the conflict. Metzel's interest in the process is not purely thematic, but also one of aesthetics: Like ramparts the mass of material, comprising lengths of wood, garbage bins, cars, and pallets, lies across the street. The images show, from one perspective, a picture of the desolation and vandalism of contemporary protest and civil disobedience. From another, they are loaded with art historical significance, for example, through Delacroixʼ famous painting, in which the personified Freedom strides over ramparts of lifeless bodies and beams of wood. And lastly, following the material assemblages and accumulations of the 1960s, this aesthetic can also be read as an extended concept of sculpture. This sculptural quality of the barricades on Hafenstraße has long-held significance for Metzel. It led him, as far back as 1990, to make his 'informel' work Wurfeisen und Zwille (Entwurf Hafenstraße), an aggregation of the scaled-up and abstracted weapons constructed from cast iron, steel, and rubber. It formed part of his first exhibition at Produzentengalerie Hamburg in the same year, and is now part of the collection of Hamburger Kunsthalle.

The exhibition Kein Kommentar speaks, on the one hand, of Metzel's personal attachment to the Hanseatic city. On the other, it tells of what has been, since the 1980s, his ongoing engagement with his medium and its limits, and with the possibilities for taking these further. Sculptural gestures, which, as with the themes, are borrowed from the everyday, can be, particularly if the everyday is not political, the squeezing of a tube of toothpaste or the scrunching up of a newspaper. Some people stack yesterday's papers with care before taking them for recycling. Others screw them up and toss them in the corner. Metzel, however, is struck by the sight of the ball of paper. He picks it up and pins it, for study purposes, on the wall above the desk.