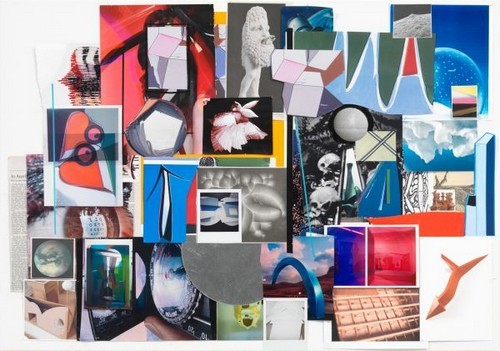 The exhibition title A.G.C.T. refers to the beginning four letters DNA’s base structure: Adenin, Cytosin, Guanin, and Thymin. These base structures pair up to build two complimentary chains of DNA, the form of the double-helix. For Scheibitz, who has always avoided the strict delineation of artistic mediums and processes, the chain-form DNA structure is a fitting metaphor for the interplay between the artistic materials of painting and sculpture, which join together in his work to form a new and insoluble structure.

The sculptures exhibited here call attention to themselves for their strange materiality. They are the result of a long line of experimentation with surface layer and modifications. The sculpture “Grill”, “Modell,” and “Verstärker” (all 2009), for example, are made of wood but covered with iron, chrome, stone granulat respectively. This disjunction plays with the viewer’s perceptual habits, challenging the credibility of his experience and urging a closer look at what is before him. Seen procedurally, Scheibitz’s work here can be seen to follow the algorithm of surrogates: one material imitates another. But the analogy stops there, for where surrogates demands that a lower material, such as plastic or linoleum, imitate another material of higher value, such as wood, metal, or marble, Scheibitz’s work empties the formula entirely of material valuation. Instead, his sculptures are about evening out the hierarchy of disguise. The metal surface covers a wood body; neither tries to look like the other or pretend it is other than what it is. Rather, it leads the viewer into a simple yet stunning perceptual break between appearance and reality. Expectations are foiled; what we see is not what is; Scheibitz disguises a thing’s honest materiality.

The same strategy can be found in his intervention in the gallery space. A supporting beam disappears behind a constructed white covering. This changes not only our visual perception, but also our bodily experience of the space. Somehow the disappearance of the beam makes us aware of what is not present by simply hiding what was.

The accompanying catalogue does not contain, as normal, new photos of new sculptures and paintings. Rather it shows photographs from the inside and outside the artist’s studio—images important to Scheibitz that form a sort of visual memory his creative process. The short preface by Scheibitz himself reveals a bit about his artistic process.
www.produzentengalerie.com