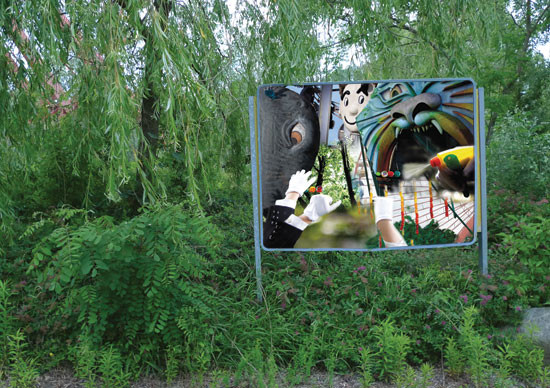 In Hops Hopsi, Hulda Ros Gudnadottir's first solo exhibition in Berlin, Spreepark - the now defunct GDR-era amusement park - becomes a site for the exploration of our collective disillusionment of the restorative potentials of architecture. The GDR, with its mandate to prove socialism's superiority over capitalism, orchestrated grand ideological projects that would showcase its vitality, moral standing, and humanist ambitions. Many of these projects - indeed the project of post-war socialism as a whole - have failed. Today, the Spreepark, with its upturned dinosaurs, overgrown paths, and dilapidated structures, stands as a physical symbol of a failed experiment - a sentiment that finds reverberation in today's failed global economy.

Constructed in 1969, "Kulturpark Plänterwald" was the only permanent amusement park in the GDR and in its heyday, attracted up to 1.7 million visitors per year. Its large Ferris wheel was visible from a distance and was later replaced with an even bigger one, bought in 1989 to celebrate the 40th anniversary of the GDR. After reunification the park was renamed Spreepark and was abandoned in 2001 after going bankrupt.

Historic places are often analyzed through the political, economic and social environment that brought them about. Hops Hopsi, a room sized video installation developed for PROGRAM, reintroduces Spreepark as a site of an allegorical narrative, in which a character, developed for one of Gudnadottir's past work to embody the transcendent powers of the free-market, reappears to symbolize an opposing sentiment - the dreamworld of socialism past becomes a distorted mirror held to Gudnadottir's native Iceland, itself currently in economic and structural ruin. With a new narrative projected onto it, the park is given a new existence dislodged from other, established historical readings. Perhaps any kind of ideological posturing is really a staging - a system of facade constructions that provide an illusion of mass and substance, easy to destabilize and vulnerable to collapse.

Hulda Rós Guðnadóttir is an award winning filmmaker and visual artist based in Berlin and Reykjavik, Iceland. She holds graduate degrees in Anthropology, Interactive Design and Visual Art. Her films have been selected for screening at numerous film festivals around the world and she has exhibited in London, Berlin, Barcelona, New York and Reykjavik. [www.huldarosgudnadottir.is]