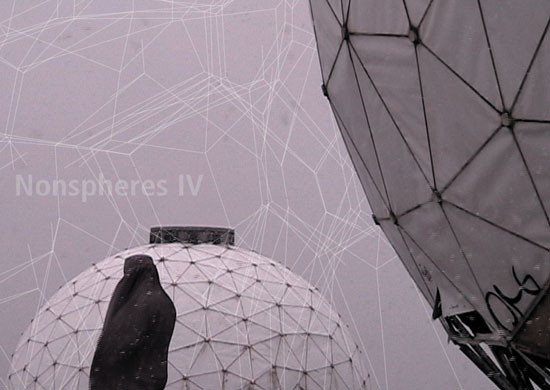 In the late 19th century, Vladimir Vernadsky discerned a new phase in biospheric dynamics – the Noösphere, or sphere of intelligence – wherein humanity could employ its gifts as a creative, collaborative agent of evolution. Vernadsky marked this change with a new era in geologic time, the Psychozoic Era, in which humanity as a whole is a powerful geologic entity, moving more mass upon the earth than the biosphere; where in this movement, the human project ends up testing its own lifespan.

Nonspheres IV is the latest iteration of Luis Berríos-Negrón’s ongoing investigation into the contemporary tension between nature and technology. This project will take the built shape of a digitally generated lattice. This simulation of a carbon tetrahedral lattice will fill the entire gallery, suggesting a continuous yet remote set of relationships intended to incite what Freud calls oceanic feelings, or the infantile sensation of boundlessness between the ego and the outside world.

This sensation is further induced through works on two geopolitically charged offsite locations - Teufelsberg, Berlin and Bibi Mahro, Kabul. Becoming entwined through these videos, the gallery+audience finds itself at once in the past, present and future, engaged in a lateral world of imaginary time in physical space.

Luis Berríos-Negrón received a Bachelor of Fine Arts degree from Parsons School of Design. Thereafter, he went to MIT where he received a Masters of Architecture degree in 2006. At MIT, he assisted Joan Jonas, Krzysztof Wodiczko, and Antoni Muntadas. He also collaborated with Bill Mitchell’s Media Lab Smart Cities Group, Carlo Ratti’s SENSEable City Laboratory, and Mark Goulthorpe’s Sinthome Workshop. While at MIT, he received the 2005 Harold and Arlene Schnitzer Prize for the Visual Arts. Previously, while working towards his BFA at The Parsons School of Design in New York, he assisted and collaborated with Larry Clark, Silvia Kolbowski and Jean Gardner from 1998 to 2003. He was then awarded the Michael Kalil Award for Smart Design. After conducting a workshop sponsored by MIT-AKPIA and the CCAA in Kabul, Afghanistan, he moved to Berlin, Germany, where he currently develops projects in digital prototyping and fabrication with Targa, Graft, and Canadian artist Michel de Broin. He has also been collaborating with PROGRAM. His work attempts to identify and produce affirmative intersections between technology, geopolitics and art. Luis Berríos-Negrón was born and raised in San Juan, Puerto Rico.