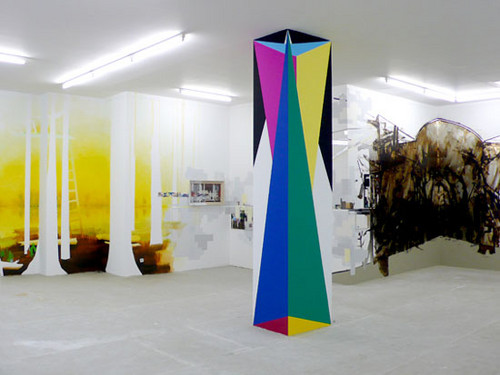 
Space, and its creation, marks a process central to both landscape painting and architecture. Though existing primarily on different dimensions, both practices seek to provide an experience of space, mediated through the operations and logic of each respective field. Where architecture deals in many aspects explicitly with the construction of spaces, landscape paintings enable an imagined space by presenting a window to the possibility of a more expansive, alternate world.

Streams, torrents, lakes, glaciers, rocks, waterfalls, steep slopes, cliffs, peaks, firs, beeches, stumps, wind, storms, snow, sunrises, and sunsets, for example is a result of a collaboration among nine artists and PROGRAM. In synthesizing the two traditions of landscape painting and architecture into one challenge, PROGRAM invited the artists that have worked often, if not primarily, with the framed image, to paint directly on the walls of the gallery responding both to the space and to the works of each other. The canvas and frame have traditionally served to delimit the painter’s influence within the dimensions of the image. Painters often work alone in their studios, and are seldom required to consider the creativity of other artists in an explicit way.

Challenging this practice, the painters have been invited to work at the same time, for nine days, directly on the walls of the gallery. PROGRAM has drawn a line at a uniform height across its interior walls – a horizon or datum that each painter will need to negotiate with in creating their interpretation of a landscape. The edges of their wall space are defined by overlaps with other artists. The time the artists spend in the gallery painting will represent a period of decision making on the nature of boundaries, site conditions and adjacencies – themes that architects also work with in their practice. The finished installation will resemble a panorama of sorts, a landscape collaged together by the group's combined imaginations.

Elena Bajo is an artist born in Madrid, Spain. She received a Masters Degree in Architecture from ESARQ, School of Architecture of the Catalunya International University in Barcelona in 2002 and a Masters Degree in Fine Arts in 2005 from Central Saint Martins School of Art in London. Her piece "Silent" received the Madrid Abierto Public Art Award in 2004. She has been recipient of the Marcelino Botin scholarship for the Taller Gabriel Orozco, the Domus Academie scholarship for the Olafur Elliasson Workshop at the Venice Biennial and the Skowhegan School of Painting and Sculpture Fellowship, in Maine, USA. She has exhibited in numerous international venues, Istanbul Biennial, PS 122 and Exit Art in New York, Central Saint Martins Gallery and Chelsea Gallery in London, East 66 Gallery in Amsterdam, among others. In 2006 her work has been exhibited at the Guardian-Saatchi Gallery London, Photo New York and Alexandra Saheb in Berlin. She is part of an exhibition entitled "Destino Futuro" at the Madrid Royal Botanical Garden. Upcoming exhibits are the Moscow Biennial, a solo project at Klara Wallner Plus in Berlin and Vision Request, A-Z West with Andrea Zittel in High Desert Sites, Los Angeles.

Leigh Bridges is a Canadian artist from Vancouver, currently based in Berlin, Germany. In May 2005, she completed the Master of Fine Arts program at the University of Victoria, Canada. Bridges was awarded the UVic Graduate Fellowship in 2004 and 2005. Since then, she has shown internationally, most recently in Toronto, Melbourne, Berlin and Vancouver. Bridges was born in 1972 in Edmonton, Alberta.

Ethan Hayes-Chute was born in Maine, USA in 1982. A 2004 graduate of the Rhode Island School of Design, he has lived in Berlin since late 2005 concentrating on his paintings and sculptures. He has shown in various cities in the US, Germany, Norway and Canada and will have a solo show in his home state in April 2007.

Keiko Kimoto was born in Kyoto, Japan, and is currently living and working in Berlin. She studied fine arts at the Berlin University of Arts (with Lothar Baumgarten, 2001-06) and graphic design at the Kanazawa College of Art (Japan, 1997-99). In November 2006 she received the Walter Hellenthal Preis für Malerei. Recent exhibitions include: “noon” at Or’est (Berlin, July 2006, solo show), "KeiKo? Gabriel" at allgirls (Berlin, February 2007), "Sputnik" at Galerie Claudius (Hamburg, March 2007).

Mark Neufeld was born February 25, 1972 in Ladner, Canada. He attended the Emily Carr Institute of Art and Design in Vancouver from 1990 to 1994 and graduated with honors from studio program. He then attended the University of Victoria, 2003-05, and completed Master’s Degree in Visual Art. In 2004 he received inaugural Joseph Plaskett Award. Currently living in working in Berlin, Germany.

Nathan Peter was born in Minneapolis, Minnesota (1978). He received his education from The Rhode Island School of Design (2001) after two years in London he moved his studio practice to Berlin where he has been living and working since. He has shown in the US, London, Copenhagen and Berlin. Recent exhibitions include "A Timely Revival" Biorama Projekt (2006) and "The New Baroque" Nice and Fit (2006).

Markus Shimizu is a Berlin based artist, working with photography and installations. He has studied at the Royal Academie of Fine Arts in the Hague and at the Kunsthochschule Berlin Weissensee. Recent exhibitions include "Freischwinger" at Berlinische Galerie and "Du, ich" at Stedefreund.

Norio Takasugi was born in Japan (1973) and is living and working in Berlin since 2004. He studied sculpture and industrial design at the Musashino Art University in Tokyo, Japan. Recent exhibitions include “Japan Now 2005” at Theaterhaus Mitte (Berlin), “39 Art” and performance “coffee&milk&sugar” at Künstlerhaus Bethanien (Berlin), “Lotto gewonnen!” at Zagreus Projekt (Berlin).

Brent Wadden was born in 1979. He graduated from NSCAD in Halifax, in 2003, and is now living and working in Berlin, Germany. Over the past few years Brent's diverse practice has included drawing, sculpture, installation, printmaking and painting. Much of his work contains collaborative elements. Wadden has recently exhibited in many group exhibitions in Canada, United States, Hong Kong, and Germany.


Special thanks to Eri Kawamura.
www.programonline.de