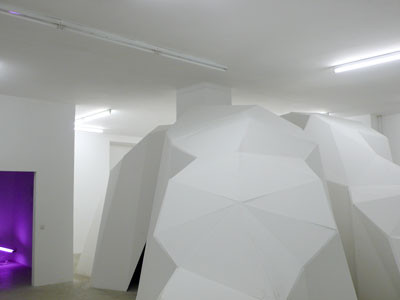 
The works in ÜBERleben take on a series of scenarios in which (retro)active myths of the Gothic are used as exercises of ideological critique. Whether we speak of psychological terror or graphic horror, the Gothic has always functioned in relation to its cultural context, exhuming fears, visualizing anxieties, or dealing with unresolved dilemmas already present in society. With details that reference 13th century Gothic architecture, the exhibition structure places the artworks in and around a series of polygonal chambers that were conceived using a technique of pentagrammatic triangulation.

In this gothic land of zombies, vampires and other monsters where social moods of stagnation, depression, anxiety, emptiness and inactivity are controlled by the boundlessness of consumption, the artworks present a vigorous need for survival. Überleben (survival, over-life) implies a certain in-between state, a state that perhaps lies between life and death while at the same time being 'over life', maybe even outside of it – a controlled 'survival' going out of control.

In Be Corpse, by artist collective Bernadette Corporation (US), footage from the Berlin Love Parade is manipulated to a voice-over with the description of a never-to-be filmed Zombie screenplay. At the Love Parade, a site of commercial and consumer exploitation, intense munching sounds are combined with mirror clad dancing legs, as a pixilated graphic 'X' is superimposed over the supposedly Bachanalian scenes.

The vampire legend, another from the Gothic genre, builds on the fear that the dead are not truly dead, that the dead have survived (überlebt) or over-lived the living and therefore remain in a sort of limbo of dependency - a dependency that is always an interdependency of parasitic nature.

Karl Holmqvist (SE) places stills of Brad Pitt and Tom Cruise from the film ‘Interview with a Vampire’ together with recent tabloids in a collage, weaving together the histories of counterculture and mass media in order to create a witty transformation which lets the real life of the actors seem more absurd than the film they act within.

Rebekka Kressley's (US) video, A Blonde Sun, establishes a similar kind of humorous terror. In an animated sequence, Paris Hilton and Nicole Richie's blond locks appear on a rising sun before they are ravaged by dark winged harpies. The parallel of the female jet set duo, empowered yet spoiled, pretty and rich, with the harpie myth of beautiful yet violent, hybrid creatures, brings out the dark reality of the vacuousness of celebrity.

In Elke Marhöfer's (DE) Erase You the camera tracks over a group of figures sprawled inside a poorly lit room, caught in an inactive, interzone somewhere between states of dread and exhaustion. While no interaction or sense of purpose makes them a group, they are bound together by a kind of collective consciousness despite their loneliness and alienation.

The sense of unidentifiable anxiety is extended in the video Arbeitsdisziplin by Rafal Jakubowicz (PL) in which a security guard is shown staring at the camera through a chain link fence, topped with razor wire. In a later sequence, we see the VW logo on a towering section of a factory behind the fence. The overcast daylight accentuates the question of whether the guard is keeping people ‘in’ or ‘out’.

Returning to music to suggest the lost echo of humanity (as if there were a song that could bring the dead back to life), Malte Lochstedt (DE) combines two separate vinyl recordings, one of Iron Maiden's Killers and the other of Mozart's Requiem, in order to create a new sound. The high classicism of Mozart's spiritual masterpiece is jump cut with the heavy metal classic from Iron Maiden, whose name was taken from a medieval torture device.

On Jannis Jaschke's (CH) pictures blackness seems to swallow up the small graphic marks and microscopic sparks that remain just barely discernable. They emanate a foreboding and threatening atmosphere of some unknown place or nothing at all.

While decorating herself with military badges - one for each shot of vodka, Elena Kovylina (RU), in her confrontational performance Waltz, invites the audience to dance to the music of Marlene Dietrich. During the performance, shot in a dark courtyard in Berlin in 2001, the artist engages the audience in her growing intoxication.

ÜBERleben investigates a growing fascination with social deterioration and apathy while exploring the significance of apocalyptic designs that restrain and influence social behavior. In doing so, the artworks not only point to the symptoms of a widespread lethargic phenomenon that embraces the subject and spectator of the works, but they also question the role of art within the culture industry.