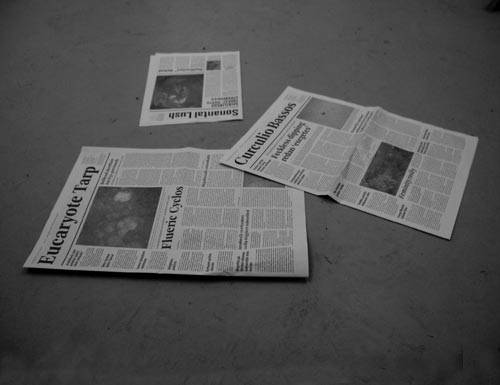 ProjecteSD is pleased to present its second exhibition of artist ́s books. For this occasion two young independent editors have been invited: Christoph Keller and ROMA Publications. Working in different environments but with similar attitudes and interests, Roma and Keller have pursued outstanding careers and created for themselves a solid space in the publishing field of contemporary art.

Christoph Keller (Stuttgart, 1969) was founder and former director of "Revolver -- Archiv für aktuelle Kunst", the non-profit publishing house based in Frankfurt am Main. Keller is presently starting a new series of artists’ books, published by the Swiss publisher JRP/Ringier, Zurich, entitled “Christoph Keller Editions”. The new publishing series is aiming to explore the bandwith of artistic book making and the mediation of contemporary art in the printed format of the book. Kellers ́s contribution to our show consists of, as he puts it: “A very personal and coincidental selection of the most inspiring artists’ books and similiar conceptual publications of the last decade, dropped down from my top shelf, mostly black on white”. Under this statement the editor has selected around 60 titles, all books by artists of different generations. His selection includes books strictly visual like the self-produced books by young painter Josh Smith, or the famous Concorde by Wolfgang Tillmans, or publications where the work of the artist is a text. This is the case of the exclusive edition of Two Views, which carefully links a story by contemporary artist Joe Scanlan with Melville ́s Bartleby the Scrivener. Or Rodney Graham ́s work The System of Landor ́s Cottage, after the artist ́s appropiation of the last story by Edgar Poe, presented in its French edition published by Yves Gevaert. And the intriging book by Liam Gillick, Erasmus is late. Some of the books are polemical like Die Toten by Hans-Peter Feldmann or The Nazis by Piotr Uklanski. Some apparently innocent like the work by Glasgow artist David Shrigley. Others almost blank books like the recent publication by Tim Lee & Markus Soo Modern Optical Experiments in Typography: Univers Ultra Light Oblique (1968). There are magazines, Re-Magazine, Dot Dot Dot, and books in the form of video like Heinrich Dubel ́s issue #8 of Ohio. Worth mentioning is the new extravagant book by Isa Genzken, I love New York, Crazy City, the work by artist Helen Mirra Names and Poems or the peculiar publication of Paul MacCarthy (black on white), Hammer, Oranges, Apple, edited by Keller with Revolver. There are also books that quote other artist ́s books, like the works by Jonathan Monk or the nice book by young artist Edgar Arceneaux 107th Street Watt ́s. Keller has also made a point in adding some historical publications. Among them, Feuer im Weizen, by Thomas Bayrle, a wonderful example of erotic pop art, Flux Paper Events by Georges Maciunas, some of the famous Ed Ruscha ́s books of the late 60 ́s and early 70 ́s, An Anectoted topography of chance by Daniel Spoerri, or the seminal works Blue Print for a Higher Civilisation by Henry Flynt, or Cover to Cover by Michael Snow.

ROMA Publications is an independent editorial project founded in 1998 by artist Mark Manders (Volkel, The Netherlands, 1968) and graphic designer Roger Willems (Tilburg, the Netherlands, 1969). Based in Amsterdam, ROMA Publications has been expanding in an informal and dynamic way as a platform for the production of autonomous publications, in close collaboration with a growing number of artists, designers, curators, writers and poets. During these years, Mark Manders and Roger Willems have defined their own territory that fuses art, design and curatorship. Among the 96 publications so far released, with print runs between 2 and 150.000 copies, there are artist books, newspapers, catalogues, posters, postcards, dvd's and an audio cd. The exhibition will proudly introduce ROMA Publications in Spain for the first time not only through its printed works but also through works from several artist this publishing project has collaborated with. Mark Manders shows two installation pieces in close relationship with his publications. Hallway with sentences (1999-2006) is an installation of sentences on the wall that derives from his book Colored Room with Black and White Scene (1999). A selection of about 70 words was alphabetically arranged and then used to form as many sentences as possible. Some of the sentences, originally presented on the book pages like horizons, are poetic landscapes or places while others are linguistic or cinematic focal points. Many of the sentences have been developed later in spatial works, and, in that sense, the Hallway with sentences can be seen as a key element in Mark Manders ́ development. Floor with Fake Newspapers (2006) is the other work by Manders in the show. A simple piece that requires no further explanation, 3 publications that have the appearance of a “newspaper” but with meaningless words and unidentifiable images, laid out on the floor. Marc Nagtzaam (Breda, 1969), will show a selection of drawings with repeated patterns, and drawings of texts collected from publications on art, works closely linked to the concept of “the book”. Other works included in the ROMA presentation are Batia Suter ́s Parallel Encyclopedia infinite collection of images and a series of photographs by Bart Lodewijks.

To receive further information on books/works in the exhibition please contact Silvia Dauder and Laura Polo at info@projectesd.com, Tel/Fax: +34 93 488 1360. Gallery Hours: Tuesday to Saturday from 11:30 to 20:30.