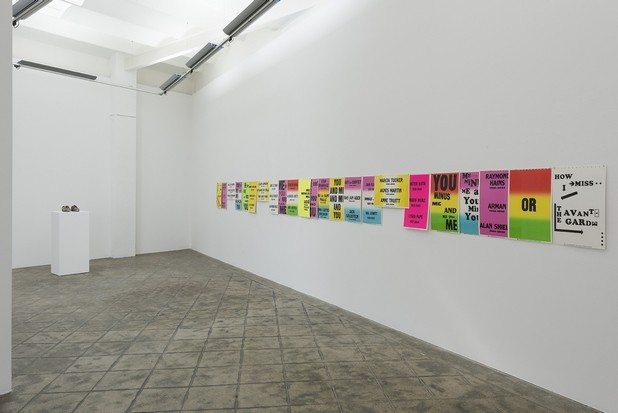 ProjecteSD is opening the season with the exhibition Accrochage #1: Allen Ruppersberg et al., a group exhibition with its focus on celebrated North American artist Allen Ruppersberg. The artist‘s first appearance in ProjecteSD was in the context of the exhibtion series The Umbrella Corner. An exhibition in 6 chapter curated by Moritz Küng in 2013. The last chapter of these shows culminated with a
Ruppersberg solo presentation. We are glad to annouce a new instance of this ongoing collaboration with the artist presenting now an iconic work, As the crow flies over the horizon (2008-2016).

The work is an installation of 23 colourful overlapping laminated posters with printed text bearing the names of famous “avant-garde” artists with birth dates and death dates and different combinations of the pronouns “me” and “you”. Ruppersberg’s uses for this work the famous Colby posters, printed by Los Angeles’s Colby Poster Printing Co., that after serving and inspiring many artists for decades, shut down in 2012. Multicoloured, with unexpected gradients of flashy, typically Californian colours, covered with outrageously bold characters that with its heavy, sans-serif typeface do not respect any typographical rules, the Colby posters have become Ruppersberg’s signature since the 1980’s.

As the crow flies over the horizon pays tribute not only to some important figures in the recent art history but also to the close circle of the artist’s friends. An emotional dimension permeates the work, something that can be appreciated in Ruppersberg constant homage to friends, people and places that have been of personal significance to him. In fact, the homage is a way of establishing affective bonds with Ruppersberg’s referential universe and the everyday culture that surrounds him.

Ruppersberg’s work is put together with four other works by Koenraad Dedobbeleer, Hans-Peter Feldmann and Guillaume Leblon all sharing an evocative, poetic nature, adressing notions such as absence, rememberance, the passing of time, while also revealing the artists‘ interest in the simplicity and resourceful nature of the everyday life.
www.projectesd.com