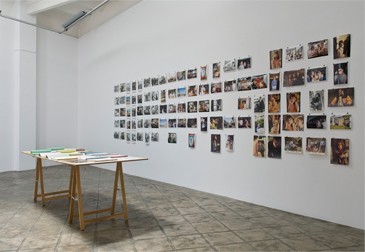 It is an honor to announce the very first exhibition in a Spanish gallery by a pioneer of Conceptual Art, North American artist Allen Ruppersberg. Together with John Baldessari, Douglas Huebler or Lawrence Weiner Ruppersberg belongs to the first generation of American Conceptual artists that changed the way art was thought about. Since the start of his artistic career in Los Angeles in the late 1960s, Ruppersberg has developed the use of language, narrative and appropriation as a means of expression and a complex dialogue on the dialectics of high and low culture, public and private spaces and the relationship between artworks, multiples and everyday objects. His exhibition at ProjecteSD forms the epilogue of The Umbrella Corner series, a six-exhibition project conceived and curated by Moritz Küng.

The series took its title from a strangely shaped corner with a stand for umbrellas, measuring only 60 x 60 cm, at the gallery’s entrance corridor, The Umbrella Corner. Each chapter of the six exhibitions has been subtitled after quotes from Ruppersberg’s 1972 iconic work Where’s Al?. Starting last September 2012, five international artists have responded with new site-specific works to this particular space and key artwork. The sequence of exhibitions has created a kind of speculative narrative, an ambiguous story about presence, avoidance and disappearance and hideaway. The five previous artists part of The Umbrella Corner have been: Willem Oorebeek, Pierre Leguillon, Sophie Nys, Dora García and Matt Mullican.

The final chapter in this exhibition series, Al said he was coming (6/6), culminates with a solo show of Allen Ruppersberg in the main gallery space, which presents as its most central work, the piece Where’s Al? Part II - The Sequel (1997). As its title indicates, it is a continuation of Where’s Al? of 1972. The two works were conceived around a special event: the 10th and 35th wedding anniversary celebration respectively of a close friend of the artist. While Where’s Al? constructs a short story with 150 instamatic photos and 121 index cards containing four-line dialogues in an attempt to locate a character named Al, Where’s Al? Part II - The Sequel composed of snapshots and cards but also of additional elements as annotations, books, film-scripts and a magazine, presents a fictional film scenario about an artist who invented his own disappearance and the unexpected consequences for his friends who conspired to help him. Ruppersberg described the pitch of this sequel himself as “a horror drama that could be seen as a meeting between The Big Chill (a comedy-drama from 1983) and Scream (a slasher film from 1996)”. An additional annotation by the artist reads “In fact the character Al, an artist, has been planning his complete disappearance for over 30 years seemingly in collaboration with some of the same people who are now asking where he is.”

Together with the presentation of this rarely known piece (shown so far at the Kunsthalle am Neumarkt in Cologne in 1998 and at Studio Guenzani gallery in Milan in 1999), two more works complete the exhibition. A new revisited version of the original Where’s Al?, displayed now, not as a wall installation, but as a sequence of projected images where the narrative element of the piece is further emphasized. And the work The Rise of L.A. (2012) which features three photo/object/sculpture/records on a shelf. On each of them everyday icons of Los Angeles cultural and commercial life during the early seventies are shown. These multifaceted objects are accompanied by a DVD-video which shows a turntable playing the recording engraved on them, thus forming an audio soundtrack to echo the visual road trip taken across the photographs.
www.projectesd.com