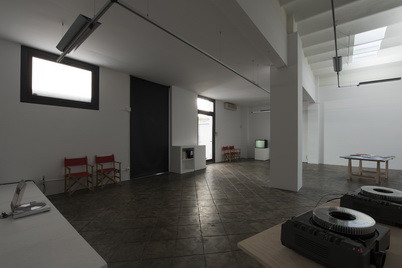 ProjecteSD is delighted to present Close-Cropped Tales, a collective exhibition which brings together works by Jochen Lempert, Gilda Mantilla & Raimond Chaves, Susan Philipsz and Isidoro Valcárcel Medina. The exhibition’s title – taken from John Baldessari’s 1981 book – serves to introduce the shared idea which is present in the work of these artists who come from different generations and contexts: the works presented draw their inspiration, conception and formalisation from books of various kinds, be they works of fiction, artist publications or historical texts. The idea of editing, an indispensable element in the process of putting a publication together, and vital in video-cinema language, acts as a conductive thread throughout the show and is present in themes as well as the medium employed to give form to the works. In Baldessari’s Close-Cropped Tales itself there is this idea of cinema editing, sequence and possible narration, intervention based on manipulating pre-existing material, and these characteristics are to be seen in many of the pieces exhibited. Stories discovered, assessed, broken down and reinterpreted through photographic or audiovisual media, and which find new form and meaning in the hands of each artist.

Río Tomo-Secretos de la Amazonía [River Tomo – Amazonian Secrets’] (2011) is a work part of the An Uncomfortable Eagerness project, in which Gilda Mantilla and Raimond Chaves investigate the resources of several libraries in Amazonia, searching not so much for their contents as the way in which the lands of the Amazon are constructed through images, and how these contribute to the forging of imagination and preconception. The projections set fragments of text drawn from César Huamán Ramírez Los secretos de la Amazonía: manual de supervivencia en la selva [‘The Secrets of Amazonia: A Jungle Survival Manual’] against fragments enlarged, with varying magnification, of a single picture of a river in the Amazon rainforest (the Tomo) printed in black and white. The texts reproduced exemplify a Western view of the Amazon marked by the clichés of colonialism and an exaggerated paternalistic condescension. The idea here is to literally be submerged in an image through fragmented blow-ups, losing the original perspective and inviting the viewer to lose themself in the immensity. This immersion is combined and counterpointed with some texts which show in a naive way how the discourse of the “exotic” and the “natural” is constructed in an apparently innocent way.

Jochen Lempert presents a work formed by linking a number of his photographs to a selection of books chosen by a group of professionals, each invited to suggest a title for the occasion. It has been an honour to have the collaboration of prestigious editors such as Yves Gevaert, Walther König and Christophe Daviet-Thery, book collectors Bill Clarke and Christoph Schifferli, experts on artist books like David Senior, Mela Dávila and Moritz Küng, artist Peter Piller and curators François Piron and Miguel Wandschneider. Lempert has responded to this blind date by searching through his photographic archive and inserting, adding or simply attaching to each book one or more photographs in a search for visual and conceptual associations between them. Lempert makes minimal gestures which act as punctuation, comments or details which introduce new viewpoints to those already provided by the books themselves. Among the titles chosen are Baldessari’s Close-Cropped Tales (1981) and publications by artists such as Heimo Zobernig, Helen Mirra, Francisco Tropa, Kader Attia, Joyce Wieland and Bruno Munari.

Susan Philipsz’ The Dead (2010) is a soundwork in which the Scottish artist sings the Irish ballad ‘The Lass of Aughrim’ a cappella. Philipsz first heard this song in the John Huston film The Dead, based on the story of the same name by James Joyce, one of the fifteen which make up Dubliners (1914). The film’s protagonist hears the song in the distance as she returns from a Christmas celebration; the melody has a devastating effect which catapults her back to a time in her youth when a pretender died for her love. The song is a recollection of something lost and is at the same time very alive: it acts as a glass half full which reaches the brim each time it is framed in new contexts and references. The work offers a time-paradox which is central in Philipsz’ work: something past, or absent, used as a device to return the viewer to the present.

La Celosía (‘Jealousy’, 1972) is Isidoro Valcárcel Μedina’s historic film which was first presented at the Encuentros de Pamplona. Through texts captured directly on screen and a succession of voices – among them that of Esther Ferrer – which give readings of different passages, it presents a cinema adaptation of Alain Robbe-Grillet’s book of the same title, one of the key works of the Nouveau Roman. Valcárcel carries description to the extreme, taking the optical quality which is characteristic of the book and objectifying the texts which appear, as such, on the screen. At the same time he readapts them with switches of language and voice, and free association. The film is an exercise about the dissociation and duration of the shot. According to Valcárcel, La Celosía is the result of setting out to ‘make a film of the book’, literally. Some texts are in Spanish while others remain in the original French. Some texts are read in various languages with the sound overdubbed or unintelligible. Many moments of dissociation which make it impossible to follow the film as if we were reading the novel.

The exhibition is rounded off by a group reading of James Joyce’s Finnegans Wake, under the guidance of the artist Dora García, which takes place in the gallery space on 30 June. Along the lines of the reading circle presented in the film The Joycean Society, the approach to the text taken by amateur readers brings a new look into the literary universe which the exhibition draws together.
www.projectesd.com