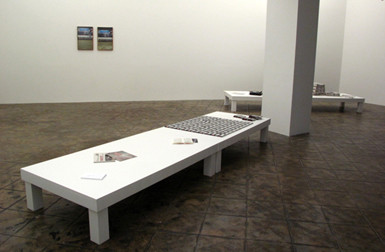 ProjecteSD is pleased to present Men I Love, the first Dora García’s solo show in the gallery.

Dora García’s work investigates the parameters and conventions involved in the presentation of art, the notion of time – real and fictive- and the limits between representation and reality. Her work is conceptual in nature, and consists of text, photographs, performances and installations restricted to a specific location. It generates contexts in which the traditional scheme between the artist, the work and the viewer is modified. Dora García uses fiction as a tool to present reality as multiple and questionable, to disclose the mechanisms involved in perception processes and to propose an unconventional relationship between artwork and audience.

Performance appears in Garcia’s work as a need for a direct communication with the audience. To a certain extent, her work uses “people” as material and involves the interplay between the spontaneous and the imposed, between knowledge and ignorance, between awareness and the unconscious, between theatricality and truth. These elements are found in The Beggar’s Opera (2007), Dora García’s contribution to Skulptur Projekte Münster’07. The project was inspired by John Gay’s XVIII century opera, The Beggar’s Opera, later adapted by Bertolt Brecht as the The Threepenny Opera. Dora García worked with a number of actors who played the character of a beggar who, during the days of the exhibition, wandered the streets of Münster interacting
with citizens and tourists. The actors functioned as catalizers, collecting and distributing information, entering into dialogue with people or triggering actions. The Beggar’s Opera was a continuation to the line of work carried out by the artist in earlier pieces such as CCL, Cellule Cité Lenine (2006), Inserts in real time (2001-2006) or The Tunnel People (2000), all of them consisting in representations in public spaces, in continuous time, where the line between fiction and real life is blurred.

More recent performances such as What a Fucking Wonderful Audience, produced for the Sidney Biennial 2008, or The artist without works: a guided tour around nothing, presented in Art Basel Miami 2008, analize “the delicate balance and fine understanding that should exist between author and reader, actor and audience, artist and viewer”. This question, already approached in The Sphinx (2004), Letters to Other Planets (2005) or The Messenger (2002), is readdressed here by the artist with a specific interest to describe action while it is happening, action and description destabilizing mutually, making the audience the object of the work, not its receiver, and eliminating then the art object. What a Fucking Wonderful Audience, was inspired by the shortest performance in history, acted by Northamerican stand-up comedian Lenny Bruce who, in 1962 in a theater in Sidney, was immediately arrested after appearing on stage uttering this sentence. It was the first time that the word “fuck” had been said publicly in Australia. The artist without works: a guided tour around nothing, was inspired by Jean-Yves Jouannais’ work, Artistes sans oeuvres. Both performances were presented later as guided tours in museums, slightly “altered”, and both of them quote a fragment of Austrian author Peter Handke’s famous play Publikumsbeschimpfung (Insults to the Audience, 1966).

Most ideas expressed in the works mentioned above are the core of our current show Men I Love. In Dora García’s words, “the exhibition is conceived as a one complex work, composed of smaller, finite, more manageable pieces” and emerges “as a reaction, homage, comment or continuation to the work of a number of male authors”. Robert Altman, J.G. Ballard, Bertolt Brecht, Lenny Bruce, Geoffrey Carey, Charles Filch, Peter Handke, Abbie Hoffman, William Holden, Wolfgang Huber, Andy Kaufmann, Daniil Kharms and Martin Kippenberger make up the list of: film makers, stand-up comedians, political activists, actors, poets, writers, playwrights and artists; all of them men who, according to Dora García, share the condition of being great conceptual artists and bear certain traits of the antihero, understood as: main character who lives according to his own moral moral compass, who makes efforts to define and construct his own values opposed to those accepted by the society he lives in.

Men I love contains new works such as Lenny’s paper, an altered edition of the international newspaper The Herald Tribune which presents on the cover the news of a real performance given by Lenny Bruce where he, in turn, presented a modified dition of the The Evening Times with the headline “Six million Jews found alive in Argentina”. The Great Gatsby read by Andy Kaufman is another work in the exhibition, and, as the title indicates, it is a recording of the reading of F. Scott Fitzgerald’s novel by Kaufman during one of his famous performances, which García presents in a series of five vinyl records with sleeves with original drawings by the artist. The 60-minute zoom, identification/projection, a handwritten script, refers to the works of Peter Handke and J.G. Ballard. Steal This Book, is a clear homage to the publication by Abbie Hoffman, and documents the correspondence between Dora García and her collaborators-actors during eleven projects carried out between 2006 and 2008. Today I wrote nothing (cover) pays tribute to Avant-garde Russian poet Daniil Kharms who wrote repeatedly in his diary “Today I wrote nothing. It does not matter”. And then between two shots of the camera, he’s gone is a set of two photographs taken during the The Beggar’s Opera performances in Münster. M*A*S*H, video produced in collaboration with Green Pig and the NamJune Paik Art Center, could be described as the Korean-Brechtian theatrical version of the famous TV series by Robert Altman. inally, the videos “Where do characters go when the story is over?” Part One y Part Two, present conversations between William Holden (his embodiment), Geoffrey Carey, Charles Filch (his embodiment) and François Piron, French curator and editor of the publication Steal This Book.

According to García, each of the pieces in Men I love fit the definition given by Dan Graham “concept as anarchist humor”, to what García adds: “concept as anarchist humor, comedy as truth, character as work, parody as homage, falsification as interpretation, nothing as something, stealing as collecting, disappearance as dignified exit. These are some of the interesting binomies that the exhibition presents.”

Dora García (Valladolid, 1965) studied Fine Arts at the Universidad de Salamanca and the Rijksakademie in Amsterdam. She lives and works in Brussels. Among her recent projects and exhibitions it is worth mentioning: William Holden in Frankfurt for Playing the City, Schrin Kunsthalle (Frankfurt, 2009), What a Fucking Wonderful Audience at Galerie Michel Rein (París, 2008), Be an outlaw, be a hero at Ellen de Bruijne Projects (Amsterdam, 2008), The Sidney Biennial 2008, Skulptur Projekte Münster’07, Zimmer, Gespräche, Galerie für Zeitgenossische Kunst (Leipzig, 2007), Contes choisis at CASM (Barcelona, 2007), CCL (Cellule Cité Lenine) at Les Laboratoires d’Aubervilliers (Paris, 2006). She has notably exhibited in the MUSAC (León, 2005), the MACBA, Barcelona Museum of Contemporary Art (2003), the MNCARS in Madrid (2005), the Stedelijk Museum in Amsterdam, in France at the FRAC Lorraine (2004) and the Frac Bourgogne (Dijon, 2005), and the SMAK in Ghent, Belgium, among many others. García was selected by Chus Martínez to participate in “Heaven”, 2nd Athens Biennial, 2009. She is currently preparing her next solo show for the CGAC in Santiago de Compostela, Spain, opening next October 8th, and her next participation at the 10th Biennale de Lyon, 2009.
www.projectesd.com