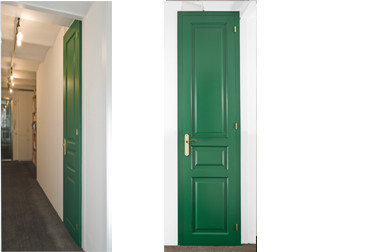 We are pleased to present the fourth part of The Umbrella Corner series, an exhibition project conceived and curated by Moritz Küng that will run parallel to the gallery’s exhibition program until June 2013.

The title of this exhibition series refers to a strangely shaped and often overlooked corner at the entrance zone of the gallery, an irregular indentation of a wall that is measuring only 60 x 60 cm in surface and that has been so far occupied by a glass stand for umbrellas. Moritz Küng establishes in that very spot a site and content specific project by inviting six artists to react on the limitations of the spatial condition as well as to a particular key work of the conceptual art movement: the installation Where’s Al? by North American artist Allen Ruppersberg produced in 1972 and today part of the Collection FRAC Poitou-Charentes in France. By doing so, the sequences of exhibitions will develop itself a narrative, an ambiguous mystery story about avoiding, disappearing, hiding, including, excluding and remembering. The complementary subtitles of the project are excerpts of dialogues from that very work. Previously shown in the corner series were Where’s Al? (1/7), a wall paper work by the Dutch Willem Oorebeek (Before and After, 2012) and Al’s missing a good time (2/7), a performance based accrochage by the French Pierre Leguillon (Ads, 2012) and Too bad Al’s not here by Belgian artist Sophie Nys (The Timid Soul, 2012).

The site-specific works and scenarios of Dora García, conceptual in nature, often draw on interactivity and performance. Through minimal changes, conventions are altered and the smallest signs are read as possible signifiers. García acts like a film director, who tells stories (or simply selects them), unchains a situation, claims a narration or makes us participants in a fictional ‘game’. Dora’s reaction to The Umbrella Corner is a new piece, The Green Door, literally a green wooden door closing the “corner” and at a same time a reference to a variety of sources taken from popular culture and fictional stories. The classic pornographic film Behind the Green Door (1972), directed by the Mitchell brothers and based on the 1940’s mistery novel by Mildred A. Wirt Benson which tells the story of an innocent American teenage-girl-reporter involved in a story where a secret door hides some illegal activity at a ski-resort hotel; The Green Door (1906), a short story by O. Henry, in which the author uses the eponymous green door as a symbol for everyday adventures which he encourages the readers to seek out; Green Door (1956), a number-one hit song by Jim Lowe and composed by Bob Davis, whose lyrics describe an establishment, with a green door, behind which “a happy crowd” play piano, smoke and “laugh a lot”, and inside which the singer is not allowed; and very specially H. G. Wells’s The Door in the Wall (1911), a short story about politician Wallace who, while growing up in a joyless home, discovers a door in a wall leading to an enchanted garden. The book suggests both the magic and the danger of a nostalgia for a buried time. Dora García’s Green Door will, however, remain locked... ‘Al’ will still be absent and we will not be allowed to discover what’s behind the green door. As García herself suggests, it is worth referring to Jacques Lacan, who described the real as unknowable and indescribable, but actively soliciting the attention of the individual, often in an aggressive manner, like “a knock on the door that interrupts a dream”.