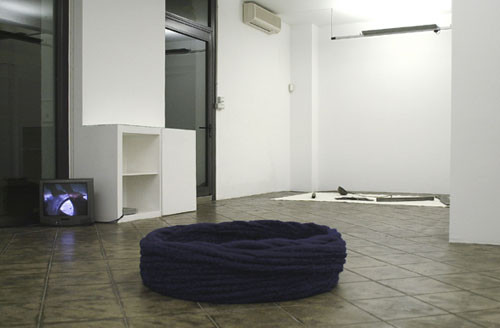 ProjecteSD is pleased to present the second solo exhibition of French artist Guillaume Leblon.
Guillaume Leblon ́s work presentations are constructed as an arrangement of abstract, self-contained and open forms. Materials are, to the artist, vehicles for ideas. His univers is heterogeneous, he creates site-specific installations, sculptures, films or works on paper. With minimal interventions he suceeds in constructing a space of multiple readings, he charges the objects of his presentations with metaphorical meanings, introducing a certain uneasiness that affects and stimulates our perception.
The extra ordinary, compiles a series of new works, minimally altered, metamorphosed elements, light or heavy structures, emerged from a domestic environment that seem to go beyond the “ordinary”. Traces of lost functions, signs of decay, reflections around dual concepts such as surface and volume, natural and artificial, model and object, form and content, the void and the filled, are subjects explored in Leblon ́s new show.
Les objets meurent aussi (2008), consists of an array of rudimentary objects, made in plasticine, seemingly old utensils gathered and composed over a piece of cloth. Worn out and lacking function, they seem to show traces of older times, or act as an image of a ruin, of a lost, extinct existence. This work also brings to mind the film by Alain Resnais and Chris Marker “Les statues meurent aussi”, 1953. Les objets meurent aussi is also linked to Notes (video, 2007). The camera moves around an experimental space, the artist ́s studio, that after being overrun with clay and water, is metamorphosed into an scenario where landscape and interior space blend, while a set of objects and fragmented actions are sketched. Some of the objects seen here, reappear embodied in a new material as sculptural elements in Les objets meurent aussi, now viewed from a new perspective.
Vestiges of natural elements, a recurring subject in Leblon ́s work, are also palpable in Sans Titre (2008), works on paper that seem to exist to preserve the raw, organic remnants of fruit, as if trying to emulate a botanical inventary, in a peculiar painterly composition.
In To the people I like (Ombre naturelle) (pastel on paper, 2008) Leblon challenges the viewer with a series of seven monochromes in which through the action of progressively folding and unfolding the papers, a sequence is presented. A paradoxical relationship between discovery and disappearance, construction and erasure, combines gently in the subtle breaks of chromatic density, in a reference to abstract tradition.
Dimensions always play an important role in Leblon ́s works. In Bench, (pine wood, 2008) the artist uses a familiar object to transform it in an ambiguous piece of furniture whose dimensions have been shifted, in a confrontation between function and ornament, object and model, that generates discomfort. The rigidity and extreme austerity of this work contrasts with the weightless Blue mazzocchio(wool, 2008), an arrangement of soft, fluffy warm stripes of wool intermingled to construct a big anular structure. Of intense chromatism, this work refers to the Florentine “Mazzocchi” (chaperon), heapieces of that time, with complex geometric design that Paolo Ucello used for his studies of perspectives.
Fragility is found in Frame of a Window (glass, 2008), an ensemble of long, roughly cut, thin lines of glass, about to collapse, leaning against the gallery walls, evoking the residual contours of an invisible window.
With this new presentation, Guillaume Leblon settles a space of haptic attraction in which he draws a landscape of uncanny objects whose meaning and function are in constant tension, where presences and absences coexist, in a paradoxical reconstruction from life and art, that contains multiple references that are never clearly articulated. Each work may be interpreted as a sketch, a finished object, a reference, an isolated finding in the artist ́s ongoing “parcours” or a possible link to a future project.
Guillaume Leblon (*Lille, 1971) studied at the National Art School in Lyon and did a residency at the Rijksakademie in Amsterdam. His works have been shown in prominent European art centers. Specially significant, were his shows at the Frac Bourgogne in Dijon (2004), and at the Kunstverein in Düsseldorf (2006). Currently on view: Maisons Sommaires , Centre d ́art Contemporain, Domaine de Kerguéhennec in France, and Four Ladders, in STUK, Leuven (Belgium). Upcoming shows: Parallel Walk, solo show at the CGAC, Center for Contemporary Art in Santiago de Compostela (opening April 10th) and solo exhibition at Culturgest, Porto, opening on May 16th. Guillaume Leblon will be in residency at the Independent Study Program (ISP) in New York next Fall.
www.projectesd.com