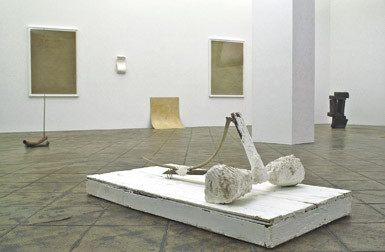 ProjecteSD is pleased to present Strange Form of Life, the third solo exhibition of Paris based artist Guillaume Leblon.

Leblon’s work is mainly developed in the field of sculpture and installation, although it expands to other media as film, video or works on paper. His work is a subtle game of concealment and disclosure, an attempt to discern an atmosphere, a slow process towards the discovery of an undefined place. Leblon conceives his exhibitions as landscapes where references evoking nature, architecture, or the domestic habitat blend. With each intervention, he succeeds in activating a space of multiple meanings, where the works appear as enigmas, clues, creating open narratives of difficult categorization. Charged with metaphorical meanings, his sculptures have always a particular trait of strangeness which concentrates the attention and arouses discussion.

Strange form of life can be seen as a parcours along a personal archaeological exploration, resulting from an exercise of introspection linked to the artist’s own experience and relationship to objects, ideas and historical references. The exhibition unfolds as a confluence of sculptural objects composed primarily of rough fragments of wood or metal, found objects and dismantled pieces. All of them are items that have been part of the artist’s everyday practise within his workshop for a long time. A white coating seems to be the link assembling the various parts in one object. A constellation of raw, eroded, even archaic objects and forms which seem to share and contain the idea of simultaneity: attraction-rejection, enigma-evidence. The sensitive quality of the elements together with the physicality of the materials used, the roughness and the historical references seem to be the substrate of new Leblon’s presentation.

Three medium-scale monochrome drawings, Wet Sand I, II and III, play with the variations that manifest on the work’s surface and highlight the role played by nuances in Guillaume Leblon’s work. These works are presented on the main gallery wall, with two sculptural objects, Clara and )( in an elegant, haptic combination of volumes, surfaces and chromatic qualities.

Ottoman is a tubular mesh of canes transformed in a plastered ellipsoidal bundle, displayed over a bed of sand. The reference to a natural exterior environment in the materials which make this piece contrasts with its title’s allusion to an interior piece of furniture. Chariot is a construction of ceramic stones whose stability seems to be at stake. This same precarious equilibrium can be found in Fishing For Stability, a thin, long, elegant assemblage work, made of rusted iron anchored clumsily in plasticine. Another piece, And Lay, composed of two metal structures coated in plaster and connected by a found fishing rope. The white coating seems to dematerialise the work and inscribe on it an aura of timelessness. Char, a strange object made of sand, plaster and wood, stands out in the exhibition space. A construction of haunting beauty that inevitably brings to mind artists such as Alberto Giacometti or Cy Twombly and most likely a poetic allusion to classical antiquity.

Strange form of Life, landscape of objects, is also a drawing of the traces of a presence, even a human life through time as precious and fleeting as the sculptures themselves.
www.projectesd.com