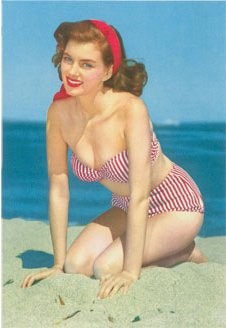 Hans-Peter Feldmann does not produce works of art in a conventional sense. He collects, documents and arranges his own photographs, photographs taken by amateurs, pictures from newspapers, department-store decorations, toys and objects emanating from our daily lives. Through ready-mades he dissociates himself from the idea of authorship.
In 1968, he produced his first work in the form of "booklets": small-format, cardboard cover, stapled together, printed in b/w, stamped on the cover with "12 Bilder" and "Feldmann" - items, in an edition of 1,000 copies, not autographed, presented unpretentiously, hanging on threads from the ceiling of the gallery. The material he used was pictures such as postcards, magazine photos, and posters. The omnipresence of reproduction already established in these early works has been a constant in Feldmann's oeuvre. Feldmann questions the missing original. The aura of a work of art and its mechanical reproduction no longer contradict each other, but are mutually dependent upon each other.
Feldmann's works seem to subvert all notions inherent in the art object. He manages to stimulate our capacity for understanding and to elicit collective memories, dreams and visions from trivial everyday objects. "I am not interested in the high points of life. Only five minutes of every day are interesting," says Feldmann.
Insignificant simple motives form his repertoire of works. In his photography works, it is not the image itself, but the world which opens up when many of them are put together what interests him. In one of his early works, later converted into a book, Alle Kleider einer Frau (All the clothes of a woman) a series of 70 small black and white photos show, one by one, the garments of a woman. Nothing else. The woman who the clothes belong to is only present through her clothing converted into a domestic, humble fetishistic object that provokes tenderness. In another newer series, One pound of Strawberries (2004), he presents 34 small photographs of all the strawberries making up one pound of weight.
Feldmann's reservoir of images and objects spans the wide world of kitsch. In 1977, Feldmann started to colour photocopies and paint in bright colours plaster reproductions of classical sculptures. The colour seemed to emphasize the values and dreams they represented. Feldmann's intention was to make them prettier. Similarly, years later, for his recent Skulptur Projekte Münster 2007, he had the public toilets on the Domplatz remodelled to include high-quality ceramics, colourful tiles, and two large-format pictures of flowers. And, following Hans-Peter Feldmann's clear idea of what the word "public" should mean, people were able to use the facilities at no charge. All these works when seen in the context of art appear as iconoclastic. They all establish a dialectic, loaded with humour, between popular culture and art.
Hans-Peter Feldmann really paved the way for the "appropriation art" of the 1980s. His contribution to contemporary art is irrefutable and still exerting a strong influence on the younger, neo-conceptualist generation of artists. As Hans Ulrich Obrist puts it: "For more than three decades, Feldmann has been legitimising previously illegitimate art, as Pierre Bourdieu [the late French philosopher] called it; he keeps removing fences between high and low. All of this makes him one of the most influential artists in the art world, an artist's who is admired by Richard Prince, Fischli and Weiss and many other seminal figures".
It is a true honour for ProjecteSD to present Hans-Peter Feldmann's works in a solo show, for the first time in a Spanish gallery. Feldmann's universe unfolds in its richness and simplicity in the gallery space. A collection from the everyday, where no concession is made to current exhibiting conventions. An exhibition of art, as he often names his shows, to stimulate our brains and engage the viewer in a multifold reading which fortunately results in an inconclusive meaning.
ProjecteSD is much indebted to Helena Tatay. Her profound knowledge and understanding of Feldmann's oeuvre, her work as curator of Feldmann's first institutional show in Spain and as editor of the irreplaceable book "272 pages"1 have made this exhibition possible.
Hans-Peter Feldmann lives and works in Düsseldorf. His work has been shown extensively since the early 1970s. His work appeared in Documenta 5 and Documenta 6 (1972, 1976). More recent shows were at at Portikus, Frankfurt (1989), the Guggenheim Museum Soho, New York (1993), Museum Ludwig, Cologne, Germany (2003); do it, curated by Hans Ulrich Obrist in Ritter Klagenfurt, Austria (1994); Utopia Station, curated by Molly Nesbit, Hans Ulrich Obrist, and Rikrit Tiravanija at the 2003 Venice Biennale; and The Last Picture Show: Artists Using Photography, 1960-1982 at the Walker Art Center in Minneapolis, Minnesota and at the Marco de Vigo (2003), Contemporary Art gallery, Vancouver (2006), Hamburger Banhof, Berlin (2006), Kunsthalle Wien (2007), Sculptur Project 2007, Munster, and solo shows at the Sprengel Museum in Hannover, Arnolfini gallery, Bristol and Landesgalerie, Linz, Austria. (2007-2008).
His first and only solo show in Spain was at The Tàpies Foundation (2001-2002). In 2004 he was shown at the Primavera Fotogràfica de Catalunya. Most recently his series 100 Jahre was shown in The Gift of Life at the Centre d'art La Panera in Lleida (2008). Next October he will participate in the group exhibition at the Macba: Universal Archive. The Condition of the Document and the Modern Photographic Utopia (2008-2009). Hans-Peter Feldmann is also part of the group show La sombra de la historia at the CGAC in Santiago de Compostela (2008).
www.projectesd.com