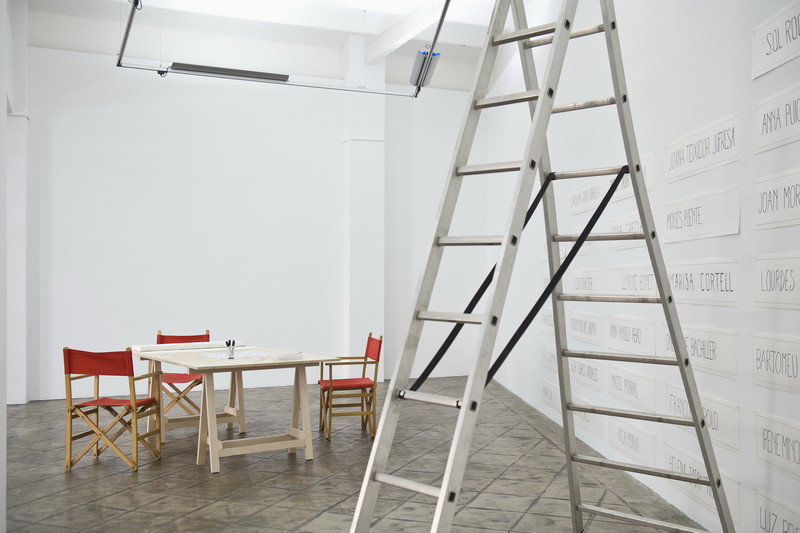 It is a great honor for ProjecteSD to present the solo exhibition of Isidoro Valcárcel Medina, Vostè Mateix (Do it yourself).

Since the seventies, the work of Isidoro Valcárcel Medina has evolved from objects that might become art merchandise to a dematerialisation encouraging the appearance of an attitude which transforms awareness of perception, not so much into an artwork as into an art experience. That attitude is what has enabled him to interrelate life with art, and art with a provocative critical reflection on reality. Art no longer understood as an object-producing activity, but as one which produces realities, no less, situations, an uncertain place, an space in which to intervene to transform the structures in acts of free communication.

As it is common in the work of Valcárcel Medina, his proposal for ProjecteSD breaks the idea of a conventional exhibition project. The artist uses and puts in the hands of the visitors the gallery space, so that it is them, the audience, who once they accept the exercise that Valcárcel Medina suggests, build the exhibition. On the opening day, the exhibition starts with its space totally empty, with no artworks. A simple working table with a stack of papers and a few writing tools on it and a ladder in the background are the only elements that the public will find in the show. Each visitor is confronted with a proposal, a quite simple one: to handwrite his/her name and lastname/s on some prepared sheets of paper of a determined dimension in a pre-established letter type and size. If this invitation is accepted by the spectator, or maybe it should be better called actor, each of the papers with all the names hand-marked will be hung on the walls of the gallery room, and the exhibition will be filled.

Vostè Mateix is an performance, a daily event, an action conceived by the artist but carried out by the own audience, an exhibition that makes no attempt to conceal the artist’s preference for the most ephemeral forms and the most transient occasions, and whose result and final form remain unpredictable and uncertain. In the words of Valcárcel Medina: “I feel driven by the most urgent necessity to forge some link between the public and the space occupied by it, their space, which therefore becomes a public space.”

Despite its apparent simplicity, this action entails certain difficulty. On the one hand the audience of art exhibitions is faced with an unusual demand, to not just act as “observator” but somehow to be a performer accepting to play an active role that may even result uncomfortable. On the other hand, each visitor is asked to inform publicly of his/her identity and his/her visit to the show.

Vostè mateix will develop from its opening to its closure as their visitors decide. Given the ongoing character of the show, on the closing day of the exhibition Isidoro Valcárcel Medina will present a new work in the form of a lecture entitled “Dobleces de autor”, in which the artist will tell us more about the exhibition. The exact date and time of the lecture will be announced shortly.

Isidoro Valcárcel Medina (Murcia, 1937) moved to Madrid at the age of 19, to study Architecture and Fine Arts. After living in New York, in 1968 where he was in contact with minimalism. From 1972 on, after taking part in the Encuentros de Pamplona on conceptual art, his work involved actions and works for public spaces. He is one of the leading Spanish Conceptualists, not only historically, but also as an artistic referent for a new generation of creators. an important representative of conceptual art in Spain. His body of work includes performances, sound pieces, architectural projects, installations and books. From his early practice up to the present day, he has asserted a critical attitude towards both art institutions and the art market, developing instead situations and scenarios that allow him to engage in a more directly affective relation with his audience. Always rigorous, he is one of those uncommon creators who have succeeded in transporting daily life into the space of art and vice versa. Valcárcel Medina had a retrospective exhibition at the Tàpies Foundation in 2002, exhibitions at the MACBA in 2006, and the Museo Nacional Centro de Arte Reina Sofía in 2009. In 2007 he received the Premio Nacional de Artes Plásticas and recently (2011) he was awarded in the first edition of the Premios Arte y Mecenazgo. Current exhibitions and recent projects: Performance in resistance, part of 18 pictures and 18 stories organized by Bulegoa z/b in collaboration with If I Can’t Dance I Don’t Want To Be Part Of Your Revolution (2012); A Cidade e o estrangeiro, exhibition at Museo de Arte Contemporanea MAC USP Cidade Universitária, São Paulo (2012-13); Cartografías contemporáneas, dibujando el pensamiento, Caixaforum, Barcelona and Madrid, curated by Helena Tatay (2012-13); Economía Picasso, Intercambios, Particiones, Amistades, project by Pedro G. Romero for the Museo Picasso, Barcelona (2012); Constitución 1812, Macba, Barcelona (2011-12).
www.projectesd.com