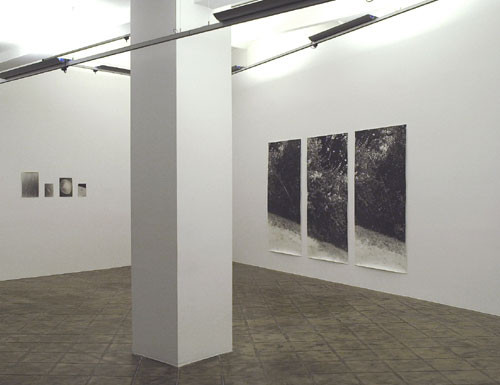 Throughout its history, photography has always evidenced points of contact with other disciplines, from the sciences right down to trivial culture. On the track of a scientific approach, the pursuit of a trail, the exploration and discovery of form, liberated from objective gestures, Jochen Lempert ́s work approaches these visual and research areas, often with the aim of questioning the criteria of the search for truth and the models of the world.
For his third solo show at ProjecteSD, Hamburg-based artist Jochen Lempert has chosen the title Cis-Trans, a scientific term that refers to the spatial configuration of structures. What is on the closer side or the further side from a specific point of view. As it is characteristic in his work, Lempert compiles images covering a broad spectrum, from quite everyday views, to images of structures that tend towards complete abstraction. He searches for the animal world in places where its occurence is not so well evidenced. Bodies, shadows or mere traces are depicted in every image. Most of them are undefined shapes, imperceptible spots, only recognised as animal figures after closer examination, after looking at the “further side”. Smaller format pictures are combined in the space with big format ones. Photographic series alternate with single pictures, highly contrasted images with almost blank papers, through which multiple links and subtle associations are woven. In series like Untitled (Spiderweb), 2006-2007, a fragile curved thread of unknown nature is discovered among leafy bushes. Seemingly, in Pour la Forme (2007), a cluster of animal life is somewhat masked in the photograph. In other works, an aerial seaview where some luminescent animals reveal in the shape of white stripes, is combined with a photogram of an insect, the picture of a fluorescent jelly-fish or the blurred shadow of a flying bird. In Meeresleuchten (Lights of the sea) (2007) with an alchemistic approach, Lempert discloses animal nature as light exposing film, presenting an astonishing sequence of white round bodies interacting and moving in space. Lempert ́s obsession with the animal world is not deprived of cultural references. In the work Untitled, 2007, he deconstructs a “blue” sculpture by Klein, revealing the animal nature of the element, a natural sponge.
With a restless capacity for observation, research, and artistic perception, Lempert ́s encyclopedic work, questions the way we perceive our environment, evoking a respectful attitude towards what is portrayed. As Eva Schmidt pointed out: (...) here one of Bataille ́s concepts seems relevant: the possibility of a intimacy, an intimacy in the world, with animality, which does not neglect the historical, economic and political conditions of „coevolution“. Jochen Lempert ́s work may certainly suggest this to us.