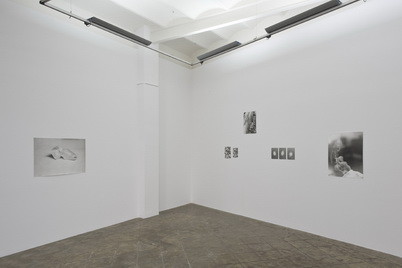 Jochen Lempert’s work approaches photographic visual and research areas, often with the aim of questioning the criteria of the search for truth and the models of the world. He photographs the animal world in the most diverse contexts: from the natural habitat to the museum of natural history, from the zoo to the urban environment, in remote places or banal objects and situations. Lempert compiles his findings in a vast archive of images covering an ample spectrum, from common everyday views, to compositions that tend towards abstraction. This interest in the natural world as a subject has been further complemented by his exploration of the properties and materiality of the photographic image. Analogue, black and white, hand-printed in the darkroom, his photographs resist categorization and confront the canons of today’s aesthetic. The fact that his photographs are exhibited unframed, directly taped to the wall, gives the works a textured, object-like sensuousness and a extraordinary immediacy that invites the viewer to step closer.

Lempert’s attentive and discerning gaze is not limited to the moment when he shoots or processes the material. His work grows in and into space. In his presentations, he uses groupings and scale to respond to the exhibition space. He places and selects the photographs thoughtfully, always looking for cross-references and associations, uncovering subtle correspondences. As Brigitte Kölle wrote: “creating new spaces to think”. Lempert’s arrangements give us new insights into our own place within the patterns, the structures, the randomness or the order of the natural world.

For his fifth exhibition at ProjecteSD Jochen Lempert has selected a combination of mostly small, medium format works, most of them never shown before. On the main wall in the exhibition space, ten photographic works are carefully displayed, some are ensembles or series, in a sort of continuous succession. Plants, petals, flowers, a cloud of steam from a cup or an outstanding image of overlapping feathers are chained together. Composition and movement, transformation, chance or order are notions that come to our mind when experiencing these works. An idea of temporality, evanescence but also balance seems to be evoked in this enticing collection of photographs.

Not less captivating are the single images that complete the exhibition. A simple image of a white bird flying over a beach, a tiny photograph of a landscape where one can barely spot a hare or the disarming simplicity of a picture of an unidentifiable standing woman wearing a flowery dress. Or the ten photo series Lyren entitled after a book by French writer Francis Ponge, displayed at the entrance of the gallery. A brilliant exercise of association, direct and unpretentious, a perfect example of Lempert’s diverse, intelligent and sensitive universe.

In its strange physicality and rich mélange of abstraction and figuration, Lempert’s practise goes beyond any possible categorization and deliberately escapes any preconceived constraining framework. His work unfolds endlessly, each photograph being like the image of an idea, to evidence the harrowing simplicity, and complexity at a time, of the artist’s exceptional vision of the world and the generosity with which he shares it.
www.projectesd.com