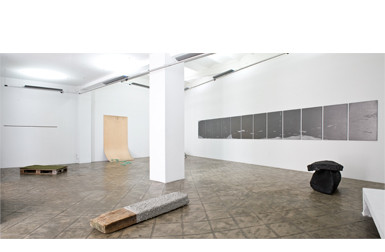 Map, Record, Picture, Sculpture presents a selection of works by four artists who approach their practice with an unavoidable preoccupation for materiality and process. Works that result from an action of arrangement and sedimentation and where the idea of the “handmade” is recovered. Notions such as landscape, mapping, the recording of a place or a time and the appropriation, the observation or the interaction with nature appear in the exhibition.


Helen Mirra makes sculptures, wall works, music, texts, films, and videos, and the touch of her hand is evident in every media she uses. Cloth is one of the artist’s signature materials together with a palette of natural colors. Four works by Mirra are presented in the exhibition. Hourly directional field recordings, Arzengio, 12 May and Hourly directional field recordings, Aquacheta, 5 May are prints (rubbings) made with oil stick on lightweight raw linen. They are direct impressions of materials picked up en route and made over the course of the artist’s walks. The resulting works are indeterminate of their geographic location, neither photographic nor descriptive. They not only show abstract landscape in their imagery, but they are also a recording of Mirra’s transition and her documentation of nature. An abstract landscape can also be seen in her earlier text piece Ought, 103. In this work, Mirra excerpts from essays by the philosopher William James to create a new text in the form of an index. A map of notions, typed on 16mm wide strip cotton with a manual typewriter. The irregularity of the type-written text gives every word a substantial materiality. Placed in front of the green double strip of text, Forest, vestige of; which doesn’t actually look vestigal at all, 74 is a sculpture made with a found shipping pallet and a green wool blanket. The pallet can be associated to the idea of a translation, a journey. The warm smooth green top, a reference to the place they come from, the German forests and evocative of the earth and nature.


Process and materiality often in relation to natural forms are guiding principles in the work of Christoph Weber. The work he undertakes on the medium he uses defines the object itself, the process or the “action with the material” appear intelligible in his sculptures. In Not yet titled, unexpectedly through the use of such a utilitarian material as concrete, the artist gives the impression of fragility and softness. A sense of the ephemeral paradoxically emerges out of the solidness of this object. In Untitled (getauchtes Holz) a found plank of wood is partly and carefully covered with a thin layer of concrete. The contrast between the two textures, the apparent tension between the natural and the artificial not only disappears but is fused into a new organic form in Weber’s hands.


Patricia Dauder’s new work, 41°08’ 56.66” N/ 08° 36’ 43.60” W (#2) is a drawing, graphite on paper, in twelve parts where a white fragmented line seems to be depicted. The work was initiated during the artist’s short residency in Porto, Portugal and responds to her walkings along the river Douro. Its title refers to the coordinates of a place, a latitude and a longitude, and in this sense refers to the notion of cartography. The definition of the title contrasts with the abstract quality of the work, where the idea of a landscape and a journey are evoked. Produced in a rather slow process, the drawing is seen by the artist as a path, a track, an undefined and invisible interface between water and land or a symbolic depiction of a non-existing place.


Guillaume Leblon’s work is filled with references evoking nature, architecture, or the domestic habitat. His sculptures have always a particular trait of strangeness which concentrates the attention and arouses discussion. Inspired by the various materials and objects washed up on the beach by the tide, Curved plate (with rope) is a large deformed poplar plate, bearing the signs of deterioration caused by time and external conditions. The two black sculptures also on view, Grande Roue, a deformed “wheel” and Grand Chariot, a dolmen-like construction in precarious equilibrium, are both made of unfired earthen slabs. The three works by Leblon share the quality of being at the limit of the point of rupture and in this sense may relate to the idea expressed by François Piron of “the appropriation of the concept of nature”, that can be also expanded to all works in the exhibition: “the apparent inertia of the living and its resistive power in the process of growth and decline, its rising up and its fall into entropy*.

*What you look at is where it’s locked in. Text by François Piron in Guillaume Leblon. Une appropriation de la nature (2013).
www.projectesd.com