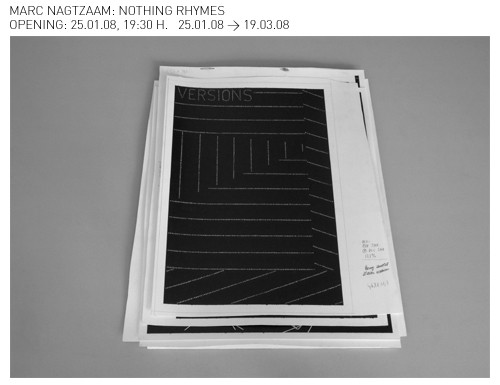 ProjecteSD is pleased to present the work of Antwerp-based Dutch artist
Marc Nagtzaam.
Marc Nagtzaam ́s medium is drawing. He uses abstracted elements from
architecture, texts from magazines, details from found photographs, or
even parts from previous drawings, as starting points for every series of
works. The source material being reduced, he draws lines, circles, words
or sentences, in meticulous, mostly colorless compositions. In many of his
works a vivid, obsessive interest in the hypnotic plasticity of language is
found. The idea of copy and repeatition appears as a ritual and an
essential element in his work process. Reminiscent of minimal and
conceptual aesthetics there is a degree of the freedom in Nagtzaam’s
luminous compositions that lends his work an organic feel.
For his first solo show at ProjecteSD, Nothing Rhymes, Marc
Nagtzaam presents a new series of drawings. Dieter Roelstraete
introduces Nagtzaam ́s work in his essay Twittering Machines written
specifically for the artist ́s exhibition at ProjecteSD.
Marc Nagtzaam (*1968, Helmond) has been featured in group exhibitions
at the SMAK in Ghent, Culturgest, Lisbon and most recently at the
Stedelijk Museum in Amsterdam (2007). His art was the subject of the
very first Roma Publications (www.romapublications.org), published in
1998: a coverless book titled Some, consisting of text fragments culled
from various banal, quotidian sources all drawn by the artist. Other
contributions in publications include recent F.R. David ́s, The Stuff and
Nonsense Issue focusing on the status of language in contemporary art
practice, edited by De Appel (2007).

TWITTERING MACHINES
(texto disponible en catalán y castellano, contactar ProjecteSD)
I have long thought of my experience of viewing Marc Nagtzaam’s work as
one of ambivalence, doubt and polarization; fitting testimony, it could be
said, to the work’s profound and exemplary artistic quality – for what is
art other, in this day and age of endless conclusions, than an exercise in
ambivalence and the practice of producing doubt where knowledge
(‘thought’) knows and asserts only certitude? This doubt or
‘thoughtlessness’ concerns Marc Nagtzaam’s well-known ‘textdrawings’
first and foremost, and is expressed in the following questions: are these
works to be (‘merely’) looked at, or to be read instead? Are they images,
pictures, i.e. works of art in the conventional sense of pictorial
representation, or are they texts –drawing or writing? These queries
trigger the memory, not so much of the programmatic obfuscation of text
and image typical of much canonical Concept Art (Art & Language, Robert
Barry, Sol LeWitt, Lawrence Weiner) to which Nagtzaam’s work is only
tenuously related (namely in LeWitt’s dedication to the monastic practice
of machine-like drawing), but rather of a much older conundrum from the
history of ideas – the duck-rabbit made famous in Ludwig Wittgenstein’s
Philosophical Investigations:
Just like Wittgenstein’s duck-rabbit is a visual reflection upon the art of
looking (seeing something vs. seeing something as), Marc Nagtzaam’s
drawings – for they are always, in the final analysis, drawings, even if
their images are made up out of words – are drawn reflections upon the
art of drawing itself: thoroughly self-referential, yet no less aesthetically
pleasing because of it, and therefore deeply inscribed in the history of
modernism – made present most palpably (and pleasingly – Nagtzaam’s
work has an extreme quality of pristine beauty) in the artist’s exploration
of that most hallowed of modernist paradigms, the grid.
The “grid”, in Rosalind Krauss’ celebrated reflection upon the “subject, is
an established figure in avant-garde art practice that embodies one of
modern and contemporary art’s longest-standing claims (the “myths”
referred to in the title of Krauss’ book The Originality of the Avant-Garde
and Other Modernist Myths) – that of its imperviousness to language, its
imperious silence (“Silence, exile, and cunning”, in the words of another
prototype of Modernist heroism, James Joyce’s alter ego Stephen
Dedalus), its refusal of speech. “The absolute stasis of the grid, its lack of
hierarchy, of centre, of inflection, emphasizes not only its anti-referential
character, but – more importantly – its hostility to narrative”; certainly
these are all qualities easily applied to Marc Nagtzaam’s drawings – with
the added twist, of course, of their use of language (the very stuff of
‘narrative’) as the grid’s omnipresent constituent element. What does a
“refusal of speech” sound like, indeed, when the muteness of the grid is
made up of words? [‘Sound’, incidentally, provides a useful set of
allegorical tools for manoeuvring the soundless world of Nagtzaam’s
pseudo- minimalist drawings: these meticulously planned works on paper
resound and resonate with images culled from the fantastical realm of the
musical imagination, resembling scores, strings, anechoic chambers. And
my visit to the artist’s studio was set to a great soundtrack indeed.]
A great variety of names, images and memories flit through my mind:
we’ve mentioned the late Sol LeWitt before, but we may also think back of
Niele Toroni, Paul Klee, On Kawara and John Baldessari’s endlessly
repeated (but, crucially, never truly boring) mantra “I will not make any
more boring art”. And while on the subject of mantras, there is of course
also the spectre of the Tibetan art of the mandala, with its mystical
overtones of drawing as a meditative, self-effacing technique – but
perhaps that is just a spectre, and should be left at that. [The same holds
true for concepts borrowed from the realm of psychopathology –
compulsion, neurosis, repetition.] What about measurements, graphs,
and Morse codes? Systems of motoric notation such as the “Benesh
Choreology”?
Finally, riding our train of thought back into the sphere of sonic
imaginings, there is the role played by improvisation in Nagtzaam’s
draughtsmanship: the obvious constraints of the grid’s structural austerity
notwithstanding, there is a degree of playful (yet all the more radical)
freedom to Nagtzaam’s luminous compositions that lends his work an
organic feel only superficially at odds with his preference for an angular,
machinic minimalism. Nagtzaam is only marginally interested in systems,
series and permutations, nor does he care for the accidental poetry of
mathematics – a popular love interest among conceptually inflected
drawing artists. To once again put it in musical terms, his work more
closely resembles the free-flight ethos of aleatory music or jazz even (I
am tempted to think back of the Jackson Pollock painting that first graced
Ornette Coleman’s landmark Free Jazz album, or – more appropriately –
the Juanita Giuffre painting on the cover of the Jimmy Giuffre Trio’s
fantastic Free Fall) than the often lifeless, soul-drained puritanical
experiments of serialism. Hence the slow, half-imperceptible yet
irresistible rise, in Nagtzaam’s visual imagination, of the figure of the
circle and the infinitely circular – a self-appointed antidote to the grid’s
potential for sterilization? A definitive symbol of playfulness pure and
simple? – a trope resounding with echoes of Brice Marden, Pollock and Cy
Twombly, or (more literally) of the circular breathing technique pioneered
by many elite corps members of the improvised music scene. Eternally
repeated, but no less different – and differentiating – for it.
“Difference and repetition” – let us conclude with a quote by that most
musical of twentieth-century philosophers, Gilles Deleuze, picked from his
magnum opus Mille Plateaux, which he co-authored with Félix Guattari:
“For sublime deeds like the foundation of a city or the fabrication of a
golem” – we are free to add “the creation of a work of art” to this list –
“one draws a circle, or better yet walks in a circle as in a children’s
dance”. And what else is dancing but the body’s song of freedom,
from the bounds of certainty, knowledge and thought?