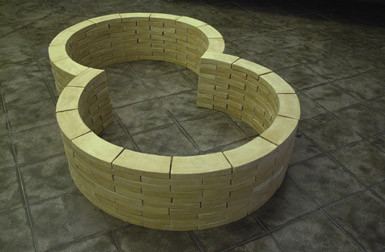 Space and architecture are essential elements in Pieter Vermeersch’s work. Although his work is often purely abstract, it is an abstraction of something real and physical. In a way, light, colour, paint and space are not just the mediums of his work but the the subjects as well.

For his third exhibition at ProjecteSD, Reception: Pieter Vermeersch hosts..., Vermeersch will transfom the entire exhibition space of the gallery with a vast “wall painting” single coloured, shifting in an imperceptible gradient from 0% of the colour through to 100%, from white to black in a progression of 72 grey tones. This new graduated surface redefines the way the space is perceived, inserting a new volume and thus giving dimension to the exhibition room. In front of this enveloping mural work, the observer is confronted with the idea of moving within and through painting as opposed to passively observing it. This wall gradation holds at the same time a combination of two new paintings, oil on canvas, in a configuration where space, architecture colour and light subtly merge and intersect.

The installation proposed by Vermeersch is conceived as a autonomous piece but for this specific occasion it is envisaged to also act as a framework, a vessel to host and present sculptural and painting works by four other artists: Katinka Bock, Miriam Cahn, Guillaume Leblon and Christoph Weber.

Notions as space, materiality, temporariness, process and confrontation emerge in the exhibition. Another aspect of the show is all artists’ approach to media and materials. Working with a range of different materials, techniques and forms, each artist uses them with formal precision as well as contextual consistency.

With resonances on the Arte Povera and Minimalism tradition, three sculptural works by Katinka Bock, Guillaume Leblon and Christoph Weber are laid out in the exhibition space. The city, the landscape, the territory and the exhibition space are at the heart of Katinka Bock’s artistic practise. In Stadt am Fluss (City with river), 2009, the artist merges found objects belonging to a domestic environment to construct a poetic sketched sculptural view of a possible cityscape crossed by a river. In Christoph Weber’s sculpture, Untitled (Base line), 2009, the idea of a landscape is also evoked. Attached to the main wall of the gallery space, the work is seen by the artist as a materialized construction of a line. Three raw elements, water, concrete and wood blend to create an abstract, organic composition. The sculpture can also be read as a tridimensional drawing. Guillaume Leblon’s piece Double Puits (double well), 2008, is an arrangement of hand-made raw clay bricks which create a sort of double well. First shown at Leblon ́s solo show at the CGAC, Double Puits shows a functionless object, of illogical dimensions, where anthitetic notions such as function and decorative element are confronted and a tense relationship between object and model is established. The work is also a reference to a constructive element associated to a particular landscape. The rawness of the materials used, connects with Bock and Weber’s pieces. Its austerity and elegance with Vermeersch’s painting works.

The works by Swiss artist Miriam Cahn, stand out from the ensemble as a counterpoint. Miriam Cahn’s intriguing paintings show portraits of individuals of indeterminated gender, humans or animals, with wide-eyed faces. The striking colours, the intensity and immediate impact of her ghostly images show the personal iconography developed by the artist, heavily influenced by the pugnacious feminist movement of the 1960s. The worlds of silence, women, animals and war, the transfigured body as an object of violence, are constantly reflected in her work. Cahn’s works simultaneously convey a sense of melancholy solitude and a vivid impression of creative, revolutionary force.

This exhibition is the result of a collaborative project between ProjecteSD and Paris based Galerie Jocelyn Wolff. The first presentation was a curated group exhibition held last summer in the Parisian gallery where works by both galleries’ artists were shown.
www.projectesd.com