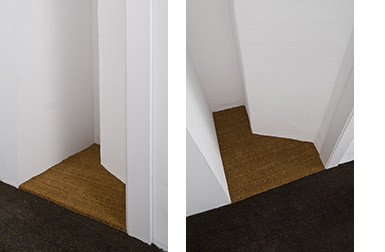 We are pleased to present the third part of The Umbrella Corner series, an exhibition project conceived and curated by Moritz Küng that will run parallel to the gallery’s exhibition program until June 2013.

The title of this exhibition series refers to a strangely shaped and often overlooked corner at the entrance zone of the gallery, an irregular indentation of a wall that is measuring only 60 x 60 cm in surface and that has been so far occupied by a glass stand for umbrellas. Moritz Küng establishes in that very spot a site and content specific project by inviting six artists to react on the limitations of the spatial condition as well as to a particular key work of the conceptual art movement: the installation Where’s Al? by North American artist Allen Ruppersberg produced in 1972 and today part of the Museum of Modern Art collection in New York. By doing so, the sequences of exhibitions will develop itself a narrative, an ambiguous mystery story about avoiding, disappearing, hiding, including, excluding and remembering. The complementary subtitles of the project are excerpts of dialogues from that very work. Previously shown in the corner series were Where’s Al? (1/7), a wall paper work by the Dutch Willem Oorebeek (Before and After, 2012) and Al’s missing a good time (2/7), a performance based accrochage by the French Pierre Leguillon (Ads, 2012).

The practice of Zurich based Belgian artist Sophie Nys brings conceptual and minimalist artistic strategies to their logical and formal limits by exploiting the broad artistic license possible within the contemporary art milieu. Her approach often leads to a demystification of the art object and current art practices that form the contemporary art scene object. Far from being flippant, her installations and video work - though seemingly ironic - maintain their eloquence as poetic reflections on her subjects derived from the every day. In her new work for The Umbrella Corner, entitled The Timid Soul, she is indirectly inspired by another iconic work of Ruppersberg: Al’s Grand Hotel from 1971. Superposing on top of the existing gallery’s coconut-carpet an additional, made to measure coconut-doormat that fits exactly into the corner, Nys is referring to the two - apparently still existing - coconut palm trees in the garden of the former Al’s Grand Hotel building on 7175 Sunset Blvd in Hollywood. Next to that, she is presenting a new edition that shows the disgraceful, weak, unassertive and spineless Caspar Milquetoast - aka The Timid Soul, a comic strip character created by H.T. Webster In 1924 - that peeps from behind a frame - a reworked cover of Time Magazine; unhopefully a reference to American popular culture, like Mr. Ruppersberg did himself so often.

The next show in the series The Umbrella Corner (4/7), will open on January 26, 2013, with a new work by Spanish artist Dora García, which will run simultaneously with a solo exhibition of Isidoro Valcárcel Medina in the main gallery space.
www.projectesd.com