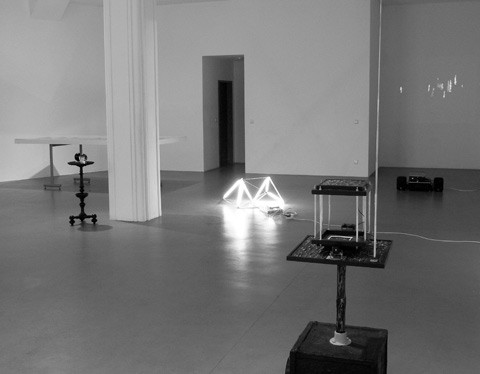 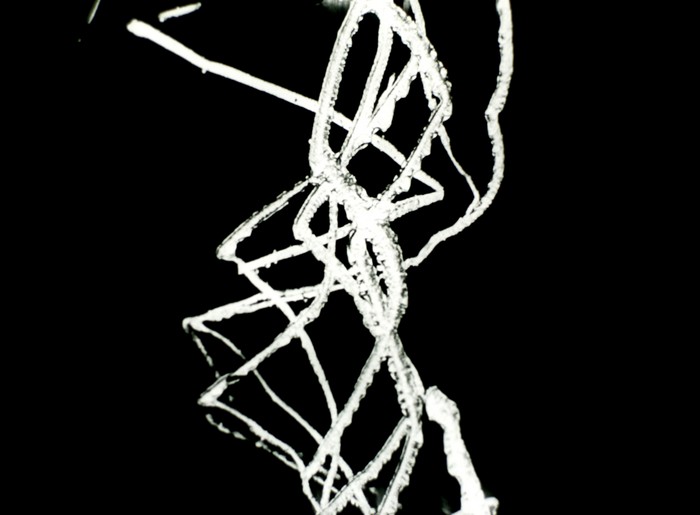 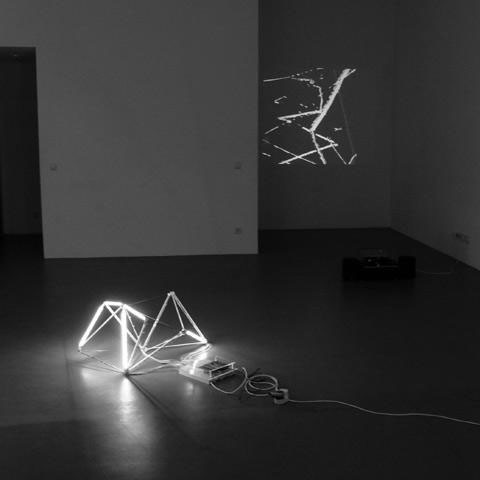 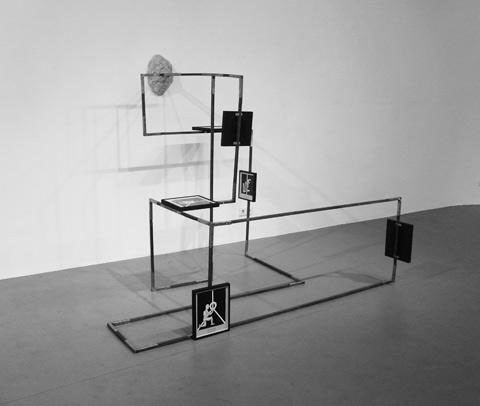 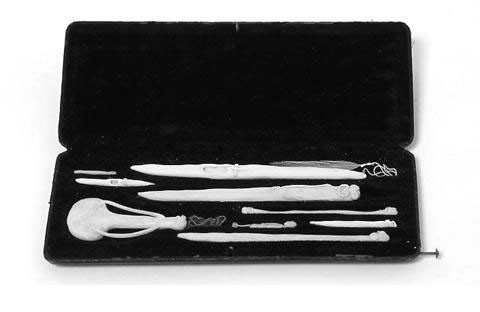 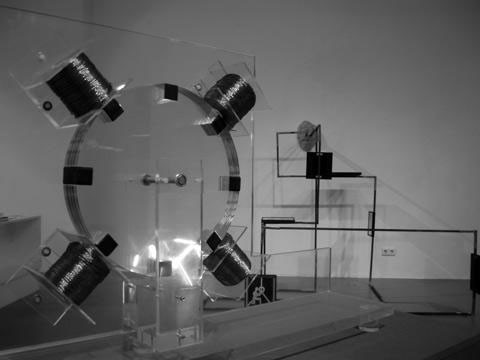 The exhibition Free Radicals takes its title from and features the 1958 film of the same name by New Zealand artist Len Lye.

Free Radicals has been described by Lye’s biographer Roger Horrock's as "a dance of natural energies" and it is the intangible ‘natural energies’ of the works of the artists exhibited with Lye's film that is the premise for the exhibition. Lye’s abstract imagery, driven along by tribal drum music, always maintains a strong sense of physical intensity. Lines stretch, spin, wiggle, and sway and describe the intangible forces at play within the works of the exhibited artists, whether Mark Titchner’s belief systems or more specifically ‘orgones’, Kit Craig’s thought forms, Nick Laessing’s free energy, Eva Rothschild’s or Francis Upritchard’s modern voodoo, Simon Starlings conceptual story telling or perhaps in the case of Anna Barham’s light sculpture, the relationship is more formal; random flickers of light recalling the rhythms and variations of Lye’s particles in space. Lye’s film soundtrack, a field recording of the Bagirmi Tribe of West and Central Africa, lends itself as a soundtrack to the exhibition further defining the intention to quantify the “natural energies” or ‘Free Radicals’.


Anna Barham (b.1974, UK)
A Splintered Game, 2008
Anna Barham's work utilises geometry and anagrams as structures that are inherently incomplete or flexible, allowing or demanding an imaginative interaction with them. Each work celebrates potential and mutability through the suggestion of permutations and possibilities. A Splintered Game, 2008, uses randomising computer code, seeded by the time and date of each specific moment that it is switched on, to create an unpredictable and unrepeating series of pulses and rhythms in the flickering neon tubes that form the work. The title of the piece is drawn from an ongoing series of text works that use the phrase "REPLANTED IMAGES" as a limited alphabet from which to construct new meanings.

Kit Craig (b.1978, UK)
The Problem, 2008
Based on a flow chart that describes the various processes involved in solving a problem. It is a universal diagram that has been used from computer programming to personal analytical problem solving. The sculpture extrudes this flat two-dimensional diagram into a wonky modernist structure, which holds various drawings (or stages) of studio experiments. It is about understanding things through making them, trying to make the ungraspable definite. It fits into my ongoing investigations into trying to make a physical representation of a thought process.

Nick Laessing (b. 1972, UK)
Power Station (Stage 1), 2008
Laessing has spent several years following the Free Energy movement. Power Station is based on the US patent no.6545444 B2 filed in 2003 by the inventor John Bedini and continues the artist’s exploration that began with the work The place of the material world in the universe is that of an exquisitely beautiful precipitate or varied cloud-work in the universal aether in 2004. Bedini’s system, comprising of electronics and moving mechanical parts, claims this to charge a bank of batteries to produce free energy – known as the state of over-unity – by supplying more power to the batteries than is required to keep it running. Laessing built this work following websites dedicated to replicating the device. Laessing’s results are working sculptures; utopian structures whose form suggests purity, and an almost outdated physical optimism in its fetishism of the mechanical form.

Len Lye (b. 1901, NZ, died 1980, USA)
Free Radicals, 1958
Lye scratched "white ziggle-zag-splutter scratches" on to black leader, using a variety of tools from saw teeth to arrowheads. The first version of the film won a major award at the International Experimental Film Festival held in Brussels in 1958 in association with the World's Fair. Stan Brakhage described the film as "an almost unbelievably immense masterpiece". www.govett-brewster.com

Mark Titchner (b.1973, UK)
Symbolic Wishing Machine plus Orgone Accumulator, 2004
The user places a wish in the form of image or text on the plate and keeps the machine on until the wish comes true, usually within a week or two. The Orgone Accumulator will absorb orgone energy directly into the machine with the intention of harnessing the potential for the wish to be realised.

Simon Starling (b.1967, UK)
Work in Progress: particle projection (loop), 2007
Simon Starling looks to the Belgium artist Marcel Broodthaers who in 1957 worked as a laborer on the building of the Atomium. Designed by André Waterkeyn for the 1958 World’s Fair, the building was a simplified diagrammatic representation of a metal crystal, an abstracted symbol of the atom concept. Broodthaers recorded the fabrication of this pavilion through a series of photographs that were later published in the newspaper, „Le Patriote illustré“. Almost fifty years later the Atomium was restored, and its corroded aluminum shell replaced with a shiny new set of triangular panels. During the restoration, Starling produced a series of black-and-white photographs that mimicked those made by Broodthaers, and shadowed their 1950’s predecessors almost frame by frame. These are now presented as enlarged contact prints inside a vitrine.

Related to this project is a work where Starling is producing an animation of a single silver particle (viewed from an electron microscope) from a strip of negatives from his Atomium shoot. Returned to celluloid, held once more in a field of tiny silver particles, hugely amplified and feedback into the system from where it first came, this animated spectral figure, will be projected from a constantly looping 35mm black and white film - like a vast, amorphous, chandelier.

Francis Upritchard (b.1973, NZ)
No Name II (Ancestral Box), 2004
With reference to Maori culture in particular the tradition of the hei-tiki.
One theory of the origin of the hei-tiki suggests a connection with Tiki, the first man in M?ori legend. According to Horatio Gordon Robley, there are two main ideas behind the symbolism of hei-tiki: they are either memorials to ancestors, or represent the goddess of childbirth, Hineteiwaiwa. The rationale behind the first idea is that they were often buried when their kaitiaki (guardian) died and would be later retrieved and placed somewhere special to be brought out in times of tangihanga (mourning and associated activities). Because of the connection with Hineteiwaiwa, hei-tiki were often given to a woman by her husband's family if she was having trouble conceiving.